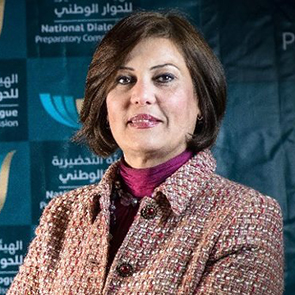 On 26 June 2014, human rights lawyer Ms Salwa Bugaighis was shot dead inside her home in Benghazi by a group of unidentified men wearing military uniforms.

Salwa Bugaighis played an active role in the 2011 uprising against Colonel Gaddafi. The human rights lawyer was known for opposing armed militias and radical Islamic extremists. Salwa Bugaighis was also a former member of the National Transitional Council (NTC).

According to reports, on Wednesday night, five unknown gunmen came to the human rights defender's home, asked about her son Wael, then shot her security guard in the leg before storming the house. Salwa Bugaighis was shot and stabbed multiple times and died of her wounds. The human rights defender was found by her cousin, and the whereabouts of her husband, who was present at the time of the attack, are unknown.

The shooting took place shortly after Salwa Bugaighis cast her vote in the national parliamentary elections. The human rights defender and her husband came to Benghazi from Tripoli to vote and, during a television appearance earlier that day, Salwa Bugaighis spoke about gunfire in her neighbourhood after militants attacked members of the military who were protecting the polling station.

The identity of the gunmen is still unknown. However, members of militias frequently target human rights defenders, policemen, judges and secular civilians in Benghazi. In addition, one month before the shooting, Salwa Bugaighis reported that her son was the victim of an assassination attempt while driving her car. The human rights defender believed that she was the intended target of the attack, her family having been forced to move to Jordan due to the death threats she has received in the past.

Front Line Defenders is condemns in the strongest terms the killing of Salwa Bugaighis, which is believed to be solely related to her peaceful and legitimate activities.

Front Line Defenders urges the authorities in Libya to:

1. Carry out an immediate, thorough and impartial investigation into the killing of Salwa Bugaighis, with a view to publishing the results and bringing those responsible to justice in accordance with international standards;

2. Guarantee in all circumstances that all human rights defenders in Libya are able to carry out their legitimate human rights activities without fear of reprisals and free of all restrictions.