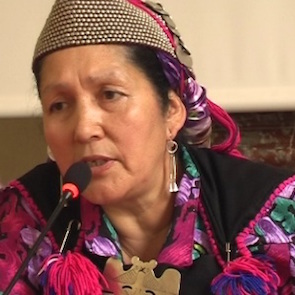 The attack occurred during a protest against the construction of a road (Los Laureles – Lago Colico) in the Mapuche indigenous people's ancestral lands.

Ms Calfunao Paillalef presented this before the Inter-American Commission of Human Rights (IACHR) in October 2015, at the Regional Thematic Hearing on the Situation of Defenders of Human Rights in the context of the Extractive Industry in Latin American. In the same month the IACHR granted the human rights defender provisional measures to ensure her safety and her family's.

On the morning of 28 October 2015 Juana Calfunao was arbitrarily arrested and beaten by police while she was protesting against the construction of a road in the Mapuche's ancestral lands. As a result of the violent detention, she suffered injuries in her mouth and a broken tooth. The human rights defender was protesting by blocking the passage of a paving machine that was laying the asphalt on the road. The police violently disrupted the peaceful demonstration and arrested the human rights defender using excessive force. Following the incident Ms Juana Calfunao filed a writ (recurso de amparo), and judge María Teresa Villagrán declared her detention completely arbitrary and ordered her immediate release.