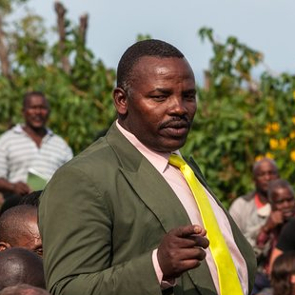 Office of the State President

On 22 March 2016, human rights defender Mr Sikhosiphi Rhadebe was shot dead outside his home by unidentified assailants purporting to be police officers.

Sikhosiphi Rhadebe was Chairperson of the Amadiba Crisis Committee (ACC), an advocacy group launched in 2007 to campaign for the rights of the residents of the Xolobeni Community in Eastern Cape, South Africa. The ACC has been at the forefront of a campaign opposing open-cast mining of titanium in the Xolobeni area by Mineral Commodities Ltd (MRC), an Australian-owned mining company.

At approximately 9.30 pm on 22 March 2016, two unidentified assailants arrived at the home of Sikhosiphi Rhadebe and knocked at his door, claiming to be police officers. The human rights defender went out to speak with them. He was subsequently taken to a parked car by the two men, and fired upon at close range eight times. He died at the scene as a result of his wounds. Earlier that evening, the human rights defender had made a telephone call to a colleague, to check on their safety and on that of a further colleague. During the call, they had talked about the existence of a hit list reportedly topped by the human rights defender, and including the names of the colleagues he was checking on.

For several years, members of the ACC, with the help of local residents, have resisted attempts by Mineral Commodities Ltd (MRC), an Australian-owned mining company, and its local subsidiary, TEM, to access the titanium-rich Xolobeni coastal dunes, arguing that the mining venture will lead to their forced removal from their land and threaten their livelihoods. More than 100 civil society organisations from across South Africa have called for the suspension of all mining permits in the area pending an outcome of the probe into the murder of the Sikhosiphi Rhadebe.

I condemn in the strongest terms the brutal murder of Sikhosiphi Rhadebe and express profound concern for the safety of his colleagues at the ACC, as I believe they are being targeted as a result of their legitimate work in the defence of human rights.

I urge the authorities in South Africa to:

2. Carry out an immediate, thorough and impartial investigation into the killing of Sikhosiphi Rhadebe, with a view to publishing the results and bringing those responsible to justice in accordance with international standards;

3. Take all necessary measures to guarantee the physical and psychological integrity and security of all members of the Amadiba Crisis Committee;

4. Guarantee in all circumstances that all human rights defenders in South Africa are able to carry out their legitimate human rights activities without fear of reprisals and free of all restrictions.