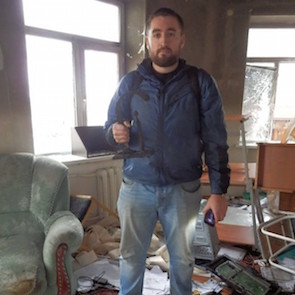 On 9 March 2016, masked men physically attacked and set fire to a bus carrying a group of human rights defenders and journalists from Ingushetia to Grozny, the capital of the Chechen Republic. The human rights defenders and journalists were travelling together whilst participating in a press tour organised to publicise the work of the Joint Mobile Group (JMG). Later on the same day, armed and masked men attacked the office of Joint Mobile Group in Karabulak, Ingushetia.

Joint Mobile Group was established in November 2009 by a group of Russian human rights organisations, with a leading role played by Committee for Prevention of Torture (CPT). It was created following the murder of human rights defender Ms Natalya Estemirova, in order to provide victims of human rights abuses in Chechnya with legal aid. JMG received the Front Line Defenders Award in 2011 for their work in investigating torture and disappearances in Chechnya, and was also the 2013 recipient of the Martin Ennals Award.

The first attack occurred not far from the Ordzhonikidzevskaya settlement in the Republic of Ingushetia, when the bus in which the group of human rights defenders and journalists were travelling was stopped and blocked by several cars. A group of around 20 masked men got out of the cars, and started to break the windows of the bus with wooden sticks, calling the people inside  terrorists and ordering them to leave the vehicle. They then began to beat the passengers and to drag them out of the bus, before setting fire to it and severely beating the human rights defenders and journalists with sticks.

All of the documents and personal belongings of the human rights defenders and journalists left inside the bus were burnt. The victims subsequently called the police and ambulance services, and Ekaterina Vanslova, Lena Maria Persson Loefgren, Oeystein Windstad and Bashir Pliev were brought to Sunzhensky hospital and diagnosed with bruises and fractures.

Ingushetia police have opened an investigation into the attack under part 2 of Article 213 (Hooliganism) and part 2 of Article 167 (Wilful Destruction or Damage of Property) of the Criminal Code of the Russian Federation.

At approximatively 10.00 pm the same day, armed and masked men attacked the office of Joint Mobile Group in Karabulak. Two of them entered the office by the window and attempted to open the entry door from inside. Human rights defenders from JMG followed the raid on security cameras installed in the office.

On 8 and 9 March 2016, the bus in which the group was travelling between Ingushetia and Chechnya was under obvious surveillance, and was followed by cars in the territories of both the Ingush and Chechen Republics.

This is the third attack on members of the JMG. In June 2015 and December 2014, the office of the organisation was attacked twice by unknown men. The police have no yet identified those responsible for the latest attack.

I express serious concern for the violent attack on members of the JMG and the journalists, as well as the break-in at the office of JMG, which I believe to be directly motivated by their legitimate and peaceful human rights activities.

I urge the authorities in the Russia Federation to: