On 19 September 2013, human rights defenders Ms Jenni Williams was arrested by Zimbabwe Republic Police during a peaceful demonstration outside the Zimbabwean Parliament. The human rights defender has been arrested more than 30 times and threatened, harassed and attacked on multiple occasions. In 2009, the Guardian described her as "one of the most troublesome thorns in Mugabe's side". 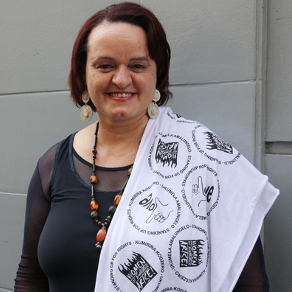 Jenni Williams is a prominent human rights defender, and is a founding member and National Coordinator of the Zimbabwean womens' rights organisation, Women of Zimbabwe Arise (WOZA), one of the most active civil society organizations in protesting government abuses in Zimbabwe.

The three women are leaders of Women of Zimbabwe Arise (WOZA), a women’s rights organisation with a country-wide membership of over 75,000 women and men. Since its inception in 2003, WOZA has organised multiple campaigns and protests aimed at allowing women to speak out on issues that affect their daily lives.

WOZA organised a peaceful demonstration on 19 September 2013 in Harare with a list of demands for the new government and local councils. Their demands included improvement on service delivery, accountability, job availability, economy recovery, and higher salaries for civil servants. The demonstration was also meant to mark the upcoming International Day of Peace commemorated on 21 September.

As the three WOZA leaders and at least 20 members marched on Zimbabwean Parliament building to present their petition, they were intercepted by police officers armed with truncheons. The three leaders were arrested and taken to Harare Central Police Station, where they were held for approximately three hours, before being released without any charges. The demonstration is said not to have lasted long, as police reportedly started to disperse protesters only five minutes after it had begun.

On 13 and 14 February 2013, peaceful protests held in Harare and Bulawayo by Women of Zimbabwe Arise (WOZA) in order to mark Valentine's Day were violently suppressed by police, with over 188 protesters arrested and many others beaten. One member of WOZA remains in detention.

WOZA is a women's rights organisation with a country-wide membership of over 75,000 women and men. Since its inception in 2003, it has organised multiple campaigns and protests aimed at allowing women to speak out on issues that affect their daily lives. This is the 11th year WOZA has conducted such protests and this year's theme was “One Love”.

At 4:00 pm on 14 February 2013, members of the Bulawayo branch of WOZA planned to stage a Valentine's Day protest outside the Police Headquarters in 9th venue, at Southampton House. The protesters, numbering approximately 800, demanded that police respond to formal complaints of alleged police beatings during a protest at water shortages on 12 November 2012, and release detained activists.

As protesters approached Southampton house, riot police reportedly intervened and beat several WOZA members. WOZA leaders Ms Jenni Williams and Magodonga Mahlangu regrouped the protest and managed to get members to sit down on the pavement so that the protest could get under way.

Police subsequently requested Jenni Williams to enter the Police Headquarters in order to hold a dialogue with the police provincial leadership. After obtaining assurances that the remaining protesters would not be harmed, she and a colleague went upstairs. During the meeting, police stated that a formal letter requesting an appointment should be submitted in order for WOZA to receive follow-up on complaints issued. The meeting ended when Jenni Williams received a telephone call from Magodonga Mahlangu, informing her that 179 protesters had been arrested by the Riot Reaction Police and taken to Bulawayo Central Police station.

The protesters were subsequently released from custody, while a number were reportedly subjected to beatings by police. One WOZA member, Ms Bertha Sibanda, remains in custody on grounds of “indecent exposure”, after she stripped naked in the police station in frustration at not having her complaints addressed. It is reported that six WOZA members had medical attention, one of whom has to have three teeth removed as a result of being beaten by police.

At 2:00 pm on 13 February 2013, members of the Harare branch of WOZA held a peaceful protest by marching towards Parliament buildings in two separate groups, numbering over 1000 people. Riot police who had gathered outside the Parliament disrupted both protests and reportedly fired five canisters of tear gas to disperse the crowd. While protesters ran for cover, many were hit with the tear gas, including over 25 WOZA members, who had to seek medical attention as a result.

Eight WOZA members and human rights defenders Ms Jenni Williams, Magodonga Mahlangu, Clara Manjengwa, Hilda Murapa, Enia Mazambare, Tambudzai Manangazira, Siphetheni Ndlovu and Maria Majoni, along with one bystander, were arrested and reportedly beaten by riot police during a 20 minute wait for a police van to take them into custody. The nine were released approximately two hours later, and spent another three hours lodging a formal complaint about the arrest, beatings and tear gas. They were then taken to hospital for treatment for injuries sustained.

Prior to the protests, police officers reportedly telephoned several WOZA members offering money in exchange for information on plans of the Valentine's Day protests. Members of WOZA have been repeatedly subjected to judicial harassment, threats, beatings and arrests since WOZA's foundation in 2003.

On 22 September 2010, human rights defender Ms Jenni Williams was arrested in Harare outside a court house following the release of 83 protesters from police detention. She was released later the same day amidst emerging reports that the 83 protesters had been ill-treated whilst in detention.

On the morning of 22 September, Jenni Williams attended a hearing at Harare Magistrate's Court, during which the Presiding Magistrate ordered the release of 83 members of WOZA who had been arrested on Monday 21 September while staging a peaceful protest regarding community safety. However, the 83 WOZA members were charged with “criminal nuisance” under the Criminal Law (Codification and Reform) Act, Chapter 46, as read with Section 2(v) of the Third Schedule to the Criminal Code. The activists were granted bail without surety and remanded out of custody until 6 October.

After the hearing, Jenni Williams and other WOZA leaders spoke to the group of released activists across the street from the courthouse in order to determine whether any of the group needed medical care following their stay in detention. Police officers approached the group and insisted that Jenni Williams accompany them to a police post located inside the courthouse, where they accused her of “addressing a gathering” and pressured her to sign a caution admitting to as such. When she tried to explain her actions, the police threatened her she would be taken to Harare Central police station.

It has been reported that Inspector Majuru of the Harare Magistrate's Court authorised her release later in the afternoon of the 22 September after she agreed to sign a caution. Inspector Majuru had not allowed Jenni Williams to be moved from the courthouse to the central police station, claiming that it was not safe to do so as various WOZA members were gathered outside and would start demonstrating if Jenni Williams appeared in public.

According to the source, the 83 members of WOZA released this morning from police detention were ill-treated whilst in custody. Amongst other incidents, including verbal abuse, it has been reported that the seven male detainees in the group were sprayed with water from a hose by a police officer while being made to sing and dance. Those who did not comply were beaten. After refusing to pay admission of guilt fines during a court hearing on 21 September, the 83 activists were obliged to eat dinner on 21 September and breakfast on 22 September in a room filled with human waste. Police officers allegedly told the activists that this was “to fix them for thinking that they have money”.

Of the 83 protesters, ten have so far required medical treatment for various conditions including dysentery. In particular, Mr Lazarus Mandondo required medical care after reportedly being beaten across the head with baton sticks and being made to stand on his head for several hours. All 83 protesters are being monitored for developing health conditions. It is believed that the ill-treatment of the protesters whilst in police custody may be linked to the fact that their protest of 20 September was carried out in order to demonstrate against police abuses in Zimbabwe.

Jenni Williams had previously been arrested and charged with public order offenses on numerous occasions as a result of her human rights work.

Women of Zimbabwe Arise (WOZA)suffer further violence as part of ongoing pattern of harassment. Charges have been brought against the seven members of Women of Zimbabwe Arise, including Jenni Williams and Magodonga Mahlangu, who had been arrested on 6 June 2007 in Bulawayo. They were all subject to ill-treatment while in detention. Take action on behalf women human rights defenders in Zimbabwe

All seven members of WOZA were arrested while conducting a peaceful demonstration on 6 June in Bulawayo. Five of them were released from detention on 8 June and were charged under Section 46 (2v) of the Criminal Law (Codification and Reform) Act, which reads: “employs any means whatsoever which are likely materially to interfere with the ordinary comfort, convenience, peace or quiet of the public or any section of the public, or does any act which is likely to create a nuisance or obstruction.”

On 9 June 2007, Jenni Williams and Magodonga Mahlangu were released on bail of $100,000 and remanded until 18 June. They have been charged under Section 46 (2v) and under Section 37 (1a) of the Criminal Law (Codification and Reform) Act, which reads: “any persons who acts together with one or more other persons present with him or her in any place or at any meeting with the intention or realizing that there is a real risk or possibility of forcibly disturbing the peace, security or order of the public or any section of the public.” They are due to appear in court on 18 June and Jenni Williams has been additionally summoned to appear in court on 23 July and 2 August in relation to arrests in 2004. Their lawyer intends to file a constitutional challenge against the State on the grounds that the charges brought against the women human rights defenders are so vague as to negate any meaning.

Moreover, Front Line Defenders is extremely concerned in relation to the ill-treatment of all seven WOZA members while they were in detention. Police officers allegedly threw buckets of water into their cells every day, which meant that the women were forced to sit on cold wet concrete. Both Jenni Williams and Magodonga Mahlangu are receiving medical treatment as a result of the three days that they were forced to spend in custody. The five other women were reportedly beaten with batons by members of the police.

Members of WOZA are now being targeted with increased aggression. On 11 June 1007, over a hundred members of WOZA attempting to conduct a peaceful demonstration were arrested in Filabusi and were released later that day without charges. WOZA members have increasingly been subject to ill-treatment while in police custody. Since 2003, there have been over ten separate cases where WOZA members have been severely beaten while in police custody after exercising their right to peaceful protest. They have been repeatedly denied access to food, lawyers and medical care. Often mothers are detained with babies for prolonged periods.