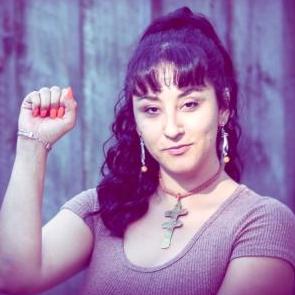 On 19 April, a federal immigration judge at Eloy Detention Center has declared that Alejandra Pablos is eligible to pay a bond of $8,000. The bond was paid and she was released from the detention center later in the day.

On 19 April, American human rights defender Alejandra Pablos Espriu will be brought before a judge for a bond hearing, which will determine whether or not she will be released from custody. She remains in detention in Eloy Detention Center in southern Arizona.

Alejandra Pablos Espriu is a defender of immigrant rights, sexual and reproductive rights, women’s rights, and an advocate of immigration and prison reform, and has worked with many immigrant rights and prison abolition organisations throughout the US. She is an active member of Mijente, a digital and grassroots hub that empowers Latinx (gender-neutral alternative to Latino) and Chicanx (individual of American nationality of Mexican descent) to create a political space that brings together leadership, advocacy, culture and media to spark culture and policy change. She works as a field coordinator for the National Latina Institute for Reproductive Health, where she seeks to raise the voices of Latinas in Virginia for policy change on all issues affecting them.

Alejandra Pablos Espriu was detained on 7 March 2018 by officers from the Immigration and Customs Enforcement (ICE) agency after what she thought was a routine hearing in a deportation case against her in Tucson, Arizona. If the judge refuses bond for the human rights defender or if ICE appeals the bond granted by the judge, she will be detained in the Eloy Detention Center until December, when the next hearing is scheduled in her deportation case.

Immigration rights activists believe that her arrest came about after her file was flagged during her routine hearing in March. She had previously been detained in January of this year at a peaceful rally of about 30 people. The rally took place outside a outside the Department of Homeland Security (DHS) and witnesses reported that the human rights defender was detained by DHS officers.

Alejandra Pablos Espriu’s case is consistent with more than twenty arrests of immigration rights human rights defenders since Donald Trump became president in 2017. The most prominent of these has been that of human rights defender, Ravi Ragbir, Executive Director of the New Sanctuary Coalition, who was taken into detention during a regular check-in with ICE. On 5 April, journalist and immigrant rights defender Manuel Duran was arrested at a protest in front of the Criminal Justice Center in Memphis, Tennessee. Although these charges against him were ultimately quashed, ICE agents had taken Manuel Duran into custody and initiated deportation proceedings.

Alejandra Pablos Espriu was brought to the US as an infant and had legal permanent residency until 2011, when she became the subject of a federal deportation order following a conviction of driving under the influence (DUI) and possessing drug paraphernalia (charges that are felonies under Arizona state law). After serving two years at the Eloy Detention Center, she was released in 2013 pending deportation proceedings. She has since applied for political asylum, fearing for her safety were she to be deported to Mexico.

Front Line Defenders urges the court to release Alejandra Pablos Espriu on bond at her hearing on 19 April, as it believes that she has been targeted for her peaceful work in advocating for immigrant and reproductive rights. Regardless of her formal legal status, Alejandra Pablos Espriu should be free to organize and advocate for the rights of others. Front Line Defenders calls on the US government to respect the role of human rights defenders working to protect the most vulnerable in US society and to immediately cease  targeting those who advocate immigrant rights.