It was about 11pm wHen it started. My husband, our four children, my little sister and I, we could hear the neighbours screaming. There was nowhere to run to because on one side of the village there was jungle, full of wild animals and on the other there was water, and we didn’t have a boat. The shooting went on and on.

Finally, they came into the house and took everything. then they told us to sit on the floor... me and my husband, naked. They tied him to the bed by his hands and feet and they asked him for money. He gave them all the money but even though they had taken everything we owned, they would not let him live. He asked them “Now that you have everything, why do you want to kill me?” and then he asked them “At least kill me with a gun, and not with a knife”. They said, “No, we're not going to shoot you. we're going to kill you piece by
piece”... and they did.

I cried “Leave him... even like this i can take him to the hospital”. My husband said “Mama Yvette, what are you going to do? Even if I survive you have no money to take me to the hospital. Better to let them finish me off”. Then they threatened to kill me too and they started to cut me. My husband said “Do whatever they want so that you can stay alive for the children”.

When they had finished they told me to put all the pieces together and lie on top of them. Then they raped me on top of my husband's body. i counted to 12 and while I was counting I heard the children screaming. My daughters of 15 and 13, and my little sister, they started raping them all. Finally, I lost consciousness. I don't know how they buried my husband.

When I awoke, I discovered that I had been in hospital for 6 months. They were giving me drugs for my head but the damage from the rape was not properly treated. my children came to visit and their stomachs were swollen. one said “Remember when they killed Dad? They raped us as well and that's why our stomachs are big”. They both had babies and I also look after these children.

When I left the hospital, I found that my house and possessions had been sold by my husband's family. They threw me out and said that I had planned it all. That the men who raped me were men i had been sleeping with and that I had wanted them to kill my husband. Then my brother's family came... they wanted me to marry my husband's brother and I refused, so they took my two younger girls away.

I had a lot of physical problems resulting from the rape and finally in 2006, i decided to talk to the doctor, and I had an operation. All the time I kept on going out into the mountains to find women who had been raped. on one of these trips I met a rebel group who asked “Do you know a woman called Masika?” i responded no. Then they told me that if I were to meet her, I should tell her that when they caught up with her, they would rape her any way they could. Then, one of the other women pointed me out as Masika, and they raped me.

After that I decided that I had to do something empowering for myself and for other women. To help women move from the state they are in today and reconnect with the women they were before. We want to show them that just because they have been raped, this is not the end. You can start again and build something fresh and new... you can be something. I set up a group called the Association of Disinherited Persons United for Development (Association des Personnes Déshéritées unies pour le Développement – APDUD). We support each other, working in the fields and growing food to sell to fund different projects. some of the girls are too young to go to work
the fields, so we teach them to sew. others have some schooling, so I look after their babies and I send them to school. There is one girl who had a baby when she was in school and now she is in university.

They can start again like me. Despite everything I went through, I am still standing and they can do it as well. 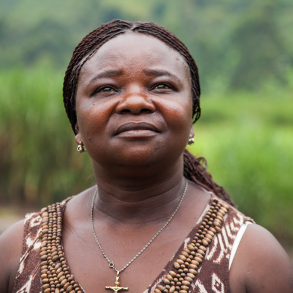 They can start again like me. Despite everything I went through, I am still standing and they can do it as well.