I am going to briefly speak about the situation of political prisoners in Colombia, and particularly that of David Ravelo Crespo. I would like to start by saying that the political Constitution of Colombia of 1991 proclaims that the Colombian state is a social state governed by the rule of law, and we should start from this basic principle. A social state governed by the rule of law is a state that must develop with the utmost respect for social organisation, free thought and free expression. It is a state that recognises, safeguards and respects the human rights of its inhabitants, and free political and ideological development. In short, it is a state that allows its people to progress within an institutional, political and legal framework, but fundamentally allows democratic and popular freedoms to be truly enjoyed.

The reality in Colombia is completely different, however, and the situation is critical. It is a state that uses its military, armed and police forces to repress social protest and social movement. It is a state that represses social protest through the laws of President Juan Manuel Santos’ Government, such as the law of Civil Security. It is a state that stigmatises, persecutes, incites hatred and murders its social leaders and human rights defenders, who, through organisation and social mobilisation, condemn the severe human rights violations and crimes against humanity committed by agents of the state and paramilitary groups. Amongst these cases, we would like to denounce all political repression against organisations such as CREDHOS, the Asociación Campesina del Valle del río Cimitarra (Peasant Association of Cimitarra River Valley) and CAHUPACANA (Corporation for Coexistence and Peace in Northeast Antioquia).

Together, we have documented 22 cases of extrajudicial executions in the period between 2005 and 2008, acts committed by the Calibío Battalion of the 14th Brigade, which has its headquarters in Puerto de Berrio in the Antioquia province of Colombia. Many social leaders have suffered with the opening of criminal proceedings, such as in the case of David Ravelo Crespo. Within this repressive political structure, we find human right defenders who are highlighting the situation and currently representing more than 7,000 political prisoners in Colombia. A few examples are the cases of Carmelo Agamez of the Movimiento Nacional de Víctimas de Crímenes de Estado (National Movement of Victims of State Crimes) in the province of Sucre, Príncipe Gabriel González of the Comité de Solidaridad con Presos Políticos (Colombian Political Prisoners Solidarity Committee) and, in particular, David Ravelo Crespo, member of CREDHOS’ board of directors.

David was arrested on the 14th September 2010 and last Wednesday (14th September 2011) marked one year since he became a political prisoner. This is the result of a prejudiced case, orchestrated and directed from the higher echelons of the Colombian state. It a case based on statements from paramilitaries such as Mario Jaimez Mejia, known as “the baker”, who is taking refuge under the Law 9/75 of 2005 (wrongfully called the Law of Justice and Peace) and calling on testimonies, constructed within the security organisations of the Colombian state, against leaders such as David Ravelo Crespo in the Magdalena Medio region. Amongst the range of accusations, he is accused of murdering an ex-mayoral candidate in 1991, and of being a member of the guerrilla organisation FARC (Revolutionary Armed Forces of Colombia). As the legal case against David Ravelo Crespo develops, a lack of safeguards in the due process has been demonstrated. For example, the proposed witnesses for the defence not being admitted, and the assignment of prosecutor 22 of the anti-terrorist unit, who is a retired chief of the Colombian national fleet, the Armada Nacional.

There are more than 7,000 political prisoners in the same situation as David Ravelo Crespo, for whom due process has been infringed in one way or another. They have been assigned military figures as prosecutors, or judges with supposed links with paramilitary groups (groups on the fringes of the law). To finish, I would like to thank Front Line Defenders and to invite all of you, as human rights defenders, to continue fighting for these rights. We will ask for and demand freedom for our political prisoners from our states, and we honour the memory of all those men and women who have surrendered their lives for human rights

That we never forget our martyrs! 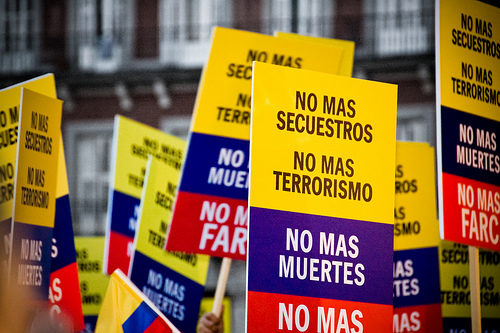 Colombia is a state that uses its military, armed and police forces to repress social protest and social movement.