Front Line Defenders is deeply concerned about the increase in police violence and the continued high number of arrests, detentions and judicial prosecution of human rights defenders and peaceful protesters during recent nationwide demonstrations in Tunisia. Front Line Defenders further condemns the use of social media as a platform by police unions to incite hatred against human rights defenders and stigmatise their work.

On 15 January 2021, the day after the 10th anniversary of the revolution in Tunisia, widespread social unrest swept across the country. While no group claims to lead the protests, several civil society groups and independent activists used social media to organise protests against the economic downturn and the corruption and impunity which they believe to be rampant within the government. Protestors also called for the dissolution of the government and an end to police repression. One civil society group published a list with demands on Facebook that included the immediate release of protest-related detainees, the establishment of a judicial mechanism for complaints about police violence, a range of financial benefits for vulnerable groups, and an increase in minimum wage.

The peaceful demonstrations were organised to protest against the chronic economic crisis and the Governments failure to respond to unemployment and poverty. The subsequent violent response by the security forces to the protests is viewed by many as excessive. Police have been extremely violent in their efforts to disperse the peaceful protests, using tear-gas and deploying baton charges against the protestors. Such police violence is reminiscent of the Ben Ali era which has triggered an even greater number of people to take to the streets in protest against police brutality.

On 1 February 2021, the situation in the country further escalated after the police unions issued a statement in which they tried to prohibit public gatherings and threatened to intensify their use of violence against protestors and human rights defenders. In response, the Tunisian League for the Defence of Human Rights (LTDH) issued a statement calling on government authorities to safeguard against police abuse and protect citizens' right to free expression and assembly, which is guaranteed in the Tunisian constitution.

On 4 February 2021, woman human rights defender Yasmine Mbarki and her four year old child were on the way back from a protest when the woman human rights defender was arbitrarily arrested, leaving her child alone on the street. Yasmine Mbarki was taken to Bouchoucha police station and was detained for more than 24 hours. During this time she was subjected to severe physical abuse; her lawyer reported that she lost a tooth and she had several bruises in her body. The woman human rights defender faces the charge of 'insulting the security forces' and her first hearing session is scheduled to be held in front of the Court of First Instance in Tunis on 25 February 2021. Yasmine Mbarki not only faces judicial harassment, but she has been subjected to defamation and abuse by unknown individuals believed to linked to police unions on social media in relation to her work in promoting women's rights in Tunis.

On 30 January 2021, human rights lawyer and defender Yassine Azaza, who legally represents peaceful protesters, was subjected to an online defamation campaign in which several public Facebook accounts from police unions published his personal information, including his phone number, and accused him of inciting violence against the State and the security forces. On 6 February the human rights lawyer participated in a peaceful demonstration, on the anniversary of the assassination of Chokri Belaid, to protest against police brutality and the repression of human rights in Tunisia. After the demonstration, Yassine Azaza and his colleague were attacked by individuals who they believe were hired by the police to aggressively break up protests. According to Yassine Azaza’s lawyer, the security forces initially recorded videos of the attack rather than trying to intervene or stop it. The human rights defender suffered injuries to his mouth, head and back and was transferred to hospital. Although the Public Prosecutor opened an investigation into this attack none of the perpetrators have been charged.

The use of social media by police to disseminate messages with homophobic content that incite hatred and violence against LGBTIQ+ community and stigmatise human rights defenders in Tunisia has been denounced by several civil society organisations, including LTDH. Human rights defender and lawyer Zoubair Elwhichi, who is president of the Tunisian League of Human Rights in North Sfax promotes and defends LGBTIQ+ rights in Sfax. On 2 February 2021, Zoubair Elwhichi was subjected to a defamation campaign on Facebook in which several posts from accounts linked to the police unions were used to stigmatise his work defending LGBTIQ+ rights.

In December 2020 and January 2021, members and staff of the Tunisian Association for Justice and Equality (Damj) who actively participated in peaceful demonstrations were arrested and detained on charges that carry heavy prison sentences. Human rights defenders and Damj members Saif Ayadi and Hamza Nasri are awaiting trial and face the charge of 'damaging property' in relation to their participation in a peaceful protest in December 2020. As a form of intimidation, Damj offices have been under constant police surveillance over the last few months, and as a result of this pressure the organisation emptied their offices in January and transferred all of the confidential documents to a different location.

On 18 January 2021, human rights defender Hamza Nasri was arrested for his participation in the peaceful demonstration against the deteriorating economic situation in the country. The Public Prosecutor in Bab Souika police station accused Hamza Nasri of 'committing an act that violates the public morals’ in relation to him raising his middle finger during the peaceful protest, and ordered his detention for 48 hours. On 21 January 2021, the human rights defender appeared before the Court of First Instance in Tunis. The Public Prosecutor ordered his conditional release and additionally charged the human rights defender of 'insulting a public servant'. Hamza Nasri’s upcoming hearing session has not yet been scheduled.

Prosecuting human rights defenders and peaceful protesters and the use of social media by police to stigmatise human rights defenders for participating in peaceful protests, for defending the rights of protestors, and for exercising their freedom of expression is incompatible with Tunisia’s obligation to respect the right to freedom of expression under Article 19 of the International Covenant on Civil and Political Rights and with the provisions of the Tunisian constitution. The police brutality that is being exercised to quash protests is also unconstitutional and Tunisian authorities must condemn such violence, and establish a judicial mechanism for complaints about police violence. Furthermore, the role of police unions needs to be limited to advocating for police wages and working conditions, and not be used as an organisation to harass, intimidate and target human rights defenders. 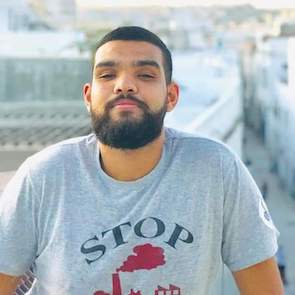