Statement on the Assassination of Dilma Ferreira Silva, leader of Brazil's Movement of Dam-Affected Peoples

In the face of the brutal crime committed on March 22nd against a coordinator of the Movement of Dam-Affected Peoples in Brazil, the undersigned human rights and environmental organizations call on Brazilian authorities and multilateral organizations to ensure that the country's provisions regarding the protection of human rights and environmental defenders are enforced.

With deep sadness and indignation, we received the news that Dilma Ferreira Silva, a regional coordinator of Brazil's Movement of Dam-Affected Peoples (MAB), together with her husband Claudionor Costa da Silva and Hilton Lopes, a friend of the family, were assassinated on Friday, March 22nd in the Amazonian state of Pará. The bodies of the three victims were found in her residence with signs of torture.

Dilma Ferreira Silva was a prominent activist and recognized leader who, for more than three decades, fought for the rights of the people affected by the Tucuruí mega-hydroelectric dam project on the Tocantins River of the Brazilian Amazon, built during the country's military dictatorship 1964 -1985), provoking the displacement of an estimated 32,000 people, along with serious environmental damage. This is not the first case of the brutal murder perpetrated against human rights defend in the region of the Tucurui dam. In April 2009, Raimundo Nonato do Carmo, a union leader who fought on behalf of those whose lives were ruined by the Tucuruí was shot seven times by two men on a motorcycle as he walked out of the supermarket on the street in which he lived in the town of Tucuruí.

Dilma dedicated her life to promoting national policies that would effectively take into account the rights of dam-affected peoples, with due attention to gender issues that particularly affect the rights of women.

Dilma Ferreira lived in the rural settlement of Salvador Allende, where land titles were issued for family farmers by the federal government in 2012, as a result of a popular mobilization of the Movement of the Landless Workers (MST), with support from MAB. However, the area continued to be coveted by land grabbers that invade and seize control of public and community lands. One such example is Fernando Ferreira Rosa Filho (aka 'Fernandinho') arrested by the civil police force of the state of Pará as the main suspect in the triple homicide of Dilma Ferreira, Claudionor Costa da Silva and Hilton Lopes.

The assassination of Dilma Ferreira Silva is evidence of the grave situation faced by human rights and environmental defenders in Brazil, a country that tops the global ranking in violence practiced against defenders, with one person murdered every six days in 2017.

The incoming administration of President Jair Bolsonaro has intensified recent attempts to undermine Brazil's progressive legislation on environmental protection and human rights - especially those of indigenous peoples, quilombolas (descendants of African slaves), family farmers and other traditional populations. Such attempts have often clashed with Brazil's progressive Federal Constitution, approved in 1988 during a period of redemocratization that followed military rule. Backsliding on public policies, together with public statements that incite violence in conflictive areas, are seriously increasing the risks faced by human rights and environmental defenders such as Dilma Ferreira Silva.

The undersigned human rights and environmental organizations express our solidarity with the family of Dilma and the Movement of Dam-Affected Peoples (MAB). Without a doubt, her assassination is a huge loss for the defense of the environment and human rights in the Amazon.

We stand with the UN High Commissioner on Human Rights in demanding a complete, independent and impartial investigation of the murder of Dilma Ferreira Silva, as well as the exemplary punishment of those who carried out and ordered this horrendous crime.

Moreover, we call on Brazilian authorities to ensure that the country's domestic legislation and international obligations are respected, including preventative action to avoid further acts of violence.

3. AMAR - Association of Defense of the Environment of Araucária

8. Inter-American Association for the Defense of the Environment - AIDA

9. Mine Association for Environmental Protection - Amda

21. Coalition for Human Rights in Development

23. Collective of Black Women of Altamira

25. Environmental Committee in Defense of Life

31. Human Rights and the Environment - DHUMA

32. Human Rights and the Environment of Puno - Peru

40. Forum on Defense of Altamira

55. International Indigenous Fund for Development and Solidarity "Batani" of the USA

63. MAB - Movement of the Affected by Dams

78. Network of Environmental Committees of Tolima

79. Gender and Environment Network of Mexico

89. Tatarstan Organization of the All-Russian Society for the Conservation of Nature

91. The Canadian Catholic Organization for Development and Peace / Caritas 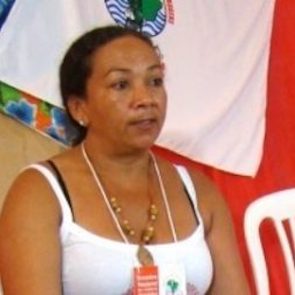