State of emergency for human rights defenders in Rondonia

On 24 October 2016, the Brazilian Committee for Human Rights Defenders warned about the alarming number of killings and death threats against human rights defenders in the Amazonian state of Rondonia. Since January 2016, at least 17 land rights defenders have been killed, representing 30% of defenders killed due to conflicts related to land in the country.

The Brazilian Committee for Human Rights Defenders has alerted the Human Rights Council special procedures, including the Special Rapporteur for Human Rights Defenders Mr Michel Forst and the Special Rapporteur on the Rights of Indigenous Peoples Ms Victoria Tauli-Corpuz, as to the great number of killings and death threats of defenders in the State of Rondonia. According to the numbers released by the Pastoral Land Commission, Rondonia had the highest number of killings related to land conflicts, with 20 deaths affecting indigenous people, quilombolas, farmers, landless people, environmentalists, rural workers and community leaders in 2015. However, the figure for 2016 stands already at 17 by October. Civil society organisations are demanding that the State fully investigate and prosecute the perpetrators for the crimes committed to date and take immediate steps to protect the safety and integrity of human rights defenders and their families.

Amongst the human rights defenders killed this year, Front Line Defenders raised the case of Nilce de Souza Magalhães with the authorities. On 21 June 2016, Nilce de Souza Magalhães' body was found by the dam of Usina Hidrelétrica in Jirau, Porto Velho. Previously, on 15 January 2016, a man was detained and confessed to her murder on the grounds of a robbery, but he escaped from prison shortly after. The human rights defender initially went missing on 7 January 2016. Nilce "Nicinha" de Souza Magalhães was one of the leaders of the Movement of People Affected by Dams (Movimento dos Atingidos por Barragens - MAB), a social movement founded in the 1970s that sought to advocate for the rights of people affected by the construction of dams. Nilce de Souza Magalhães was active in denouncing human rights violations perpetrated by the consortium Sustainable Energy of Brazil (Energia Sustentável do Brasil - ESBR), including by initiating civil and criminal proceedngs against the construction of the Usina Hidrelétrica. To date, no one has been prosecuted for her death and her colleagues continue to believe her assassination was a retaliation for her legitimate and peaceful human rights work.

Read the Full Report in Portuguese 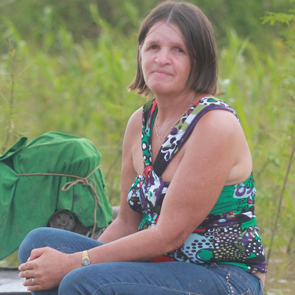