On August 1, a hearing will take place before the First Court of Cartagena, which will decide on the legality of the evidence that prosecutors in Colombia are using to criminalise the Afro-Colombian woman human rights defender (WHRD) Milena Quiroz Jimenez.

The International Service for Human Rights (ISHR), Front Line Defenders (FLD), the Observatory for the Protection of Human Rights Defenders (OMCT/FIDH), Robert F. Kennedy Human Rights (RFKHR), and Dejusticia call on authorities to cease the criminalisation against the WHRD and guarantee her right to defend human rights.

The arrest warrant against WHRD Milena Quiroz was issued in 2017 by the 3rd Prosecutor's Office of the Specialised Circuit of the city of Cartagena. She was charged with the crimes of "rebellion", "conspiracy to commit a crime" and "financing terrorist groups", due to demonstrations she organised as a social leader. When Milena was provisionally released, along with other detained HRDs, the First Criminal Judge of the Cartagena Circuit, Freddy Machado, pointed out that the accusations were not adequately substantiated with evidence, and questioned the actions of the Prosecutor's Office, stating that it rushed "to generate publicity and media coverage instead of structuring a more reasonable indictment".1

Milena Quiroz, along with 11 other leaders and inhabitants of Sur de Bolívar, has suffered reprisals for her work of protest and defence of human rights: arbitrary detentions, a long process of criminalisation fraught with irregularities, unjustified delays, lack of evidence, and non-compliance with due process guarantees.

A control judge in Cartagena ruled that Milena could not remain in her region, so she was forced to establish herself outside of Sur de Bolivar. The judge argued that Milena would otherwise continue to have influence in her municipality, be able to call for marches and be "a danger to society". For this reason, the leader was forced under house arrest far from her family and her territory, preventing her from continuing to defend the human rights of her community.

Furthermore, her hearings have been rescheduled on more than 10 occasions, the Prosecutor's Office has tried to stigmatise her by linking her to guerrilla groups - which increases her risk of being attacked - and her lawyers have been prevented from accessing evidence and interviewing witnesses that allegedly will be used against her, violating her right to a fair trial.

Milena's defence has continuously denounced these irregularities, and a criminal and disciplinary investigation against the prosecutor who promoted the criminalisation is pending. However, since 28 May 2020, more than two years ago, we have been waiting for the judge to rule on the concealment of witnesses and on whether he will reject the prosecutor's evidence. To date, this hasn’t occurred, mostly for reasons attributable to the Prosecutor's Office and the trial court. We hope that at the next hearing, on 1 August 2022, this decision will be announced, pointing out the illegality of the evidence intended to be used against Milena and respecting her rights.

The continuation of the criminalisation process would further increase the stigmatisation suffered by the WHRD and the risk of new attacks against her, as illustrated by the assassination attempt she suffered in December 2019, despite having protection measures from the National Protection Unit (UNP), or the lamentable murder of Teófilo Manuel Acuña, on 1 March 2022, criminalised along with Milena.

Milena's case is part of a broader context of persecution and violence against HRDs in Colombia. According to Front Line Defenders, in 2021, 138 social leaders and HRDs were killed in the country, making it the deadliest country in the world for the exercise of the right to defend human rights. Women defenders and leaders live in a particular situation of risk, and in recent years there has been an increase in murders, torture, sexual violence and threats against community leaders and defenders.2

In light of the above, the undersigned organisations: 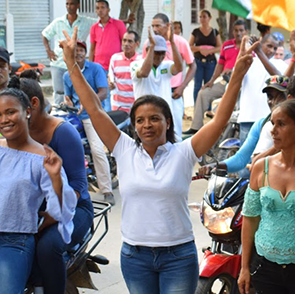