As a collective of non-governmental organisations defending human rights and freedom of the press, we urge you to exonerate and release human rights defender, journalist, and former lawyer Zhang Zhan, who is suffering from a critical health condition and may die soon if she remains in detention.

In February 2020, Zhang was among several Chinese journalists who travelled to the city of Wuhan to report on the first days of the coronavirus pandemic. Zhang Zhan has done remarkable work in informing the public about the health crisis, in accordance with the principle of press freedom enshrined in Article 35 of the Constitution of the People’s Republic of China.

On 28th December 2020, Zhang Zhan was sentenced to four years in prison by Shanghai Pudong New Area Court on the charge of ‘picking quarrels and provoking trouble’ following a mere three-hour proceeding that did not meet international fair trial standards.

In her indictment, prosecutors accused her, without providing any evidence, of publishing large amounts of ‘fake information’ and reproached her for accepting interviews from overseas media outlets, which is in no way a reprehensible action. Zhang Zhan has not pleaded guilty to any alleged crimes and demonstrated her innocence through a hunger strike which has led to the deterioration of her health.

Zhang Zhan has lost significant weight in recent weeks and is now seriously ill. Zhang Zhan was subsequently hospitalised for 11 days in early August but has since been returned to prison, where she may die if not immediately released. Zhang Zhan has also been the victim of ill treatment, which clearly goes against the United Nations Convention against Torture that China ratified in 1988.

On the grounds of basic human dignity, we appeal to you, Mr. Chairman, to grant Zhang Zhan the opportunity to meet her parents again by exercising the power granted to you by Article 80 of the Chinese Constitution and ensuring that she is released before it is too late. 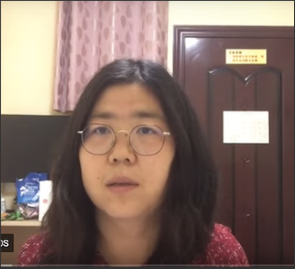