Killing of Berta Cáceres: public joint letter to the President of Honduras

We, a group of 50+ international organisations, write to express our shock and concern over the recent killing of Berta Cáceres, environmental activist and head of the indigenous rights group COPINH.

As you will know, Mrs Cáceres was shot dead by gunmen in the late hours of 2 March 2016. Over the years she had received multiple death threats and attempted kidnappings because of her work defending indigenous Lenca land against the Agua Zarca dam project in Río Blanco. These threats had escalated in recent weeks since construction of the dam had restarted.

We demand an independent international investigation into the circumstances around Mrs Cáceres’ death, and guaranteed protection for her family and colleagues. Mrs Cáceres was granted emergency protection measures by the Inter-American Commission on Human Rights because of her acute vulnerability, but she claimed the Honduran state did not fully implement them.

We also demand urgent action to protect Gustavo Castro Soto, a Mexican activist who witnessed her assassination, and to ensure his safe passage back to Mexico. 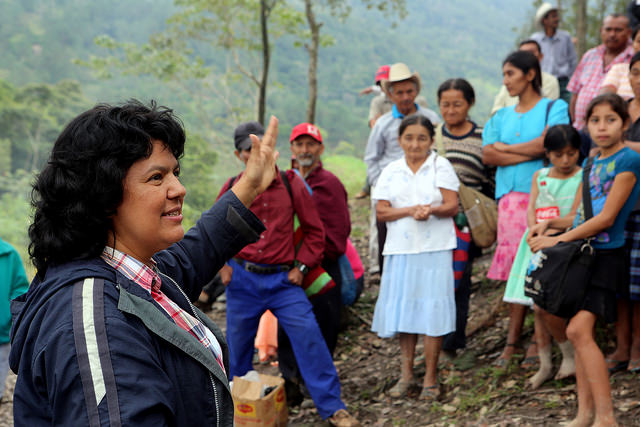 Mrs Cáceres’ case is the most high-profile killing within a growing trend in the murder, violence and intimidation of people defending their indigenous land rights in Honduras. Honduras is the world’s most dangerous country per capita to be an environmental or land defender, with at least 109 people killed between 2010 and 2015.

Mrs Cáceres’ case has not escaped international attention. In a statement issued in response to her death U.S. Senator Patrick Leahy called on you to find and punish those responsible for “this despicable crime.” Last year, US Senator Barbara Boxer wrote a letter to US Secretary of State John Kerry urging for better protection of environmental defenders in Honduras. This was in direct response to Mrs Cáceres winning the 2015 Goldman Environment Prize – a prestigious award recognizing grassroots environmental activists from around the world. News of her death has generated substantial international media attention.

The 50+ international organisations listed below call on the Honduran state to ensure indigenous peoples’ right to their land is respected and that they are able to carry out their legitimate work without fear for their safety.