Joint Statement - Tunisia: Risk of refoulement of asylum seeker in cooperation with Algerian authorities would mark a dangerous turning point for human rights for Tunisia

The undersigned organizations express their deep concern at the risk of refoulement of an Algerian asylum seeker - Zakaria Hannache - present in Tunisia since August 2022. Tunisian authorities must under no circumstances repeat the dangerous precedent set by the kidnapping and refoulement of Algerian refugee Slimane Bouhafs on 25 August, 2021, about which no investigation has been opened to date in Tunisia.

Mr. Zakaria Hannache is an Algerian human rights defender, who has been prosecuted in Algeria since February 2022 under spurious charges, including charges of “apology of terrorism” and “undermining national unity”, for which he faces up to 35 years in prison, solely for exercising his freedom of expression through his work publishing information and documenting the arrests of prisoners of conscience.

After spending several weeks in prison in Algeria and then being granted provisional release in March 2022, Mr. Hannache continued to be subject to significant intimidation and pressure in Algeria, following which he came to Tunisia, in August 2022. On 9 November, Mr. Hannache was informed that he was summoned to the court of Sidi M'hamed, in Algiers, for a hearing as part of his trial. The hearing was postponed indefinitely and could now be scheduled at any point.

Multiple international human rights organizations, as well as several United Nations Special Procedures, have highlighted the excessively vague nature of the Algerian Penal Code, threatening the right to a fair trial and the proper functioning of justice. Anti-terrorist legislation has notably been used arbitrarily and almost systematically since 2021 to target peaceful activists and journalists.

In a communication made public on 14 November, the United Nations Special Rapporteur on Human Rights Defenders expressed “serious concerns” about the arrest and detention of Mr. Hannache, as well as “the charges against him, which appear directly related to his work as a human rights defender”.

Our organizations recall that as an asylum seeker, Mr. Hannache is protected by the 1951 Geneva Convention, its 1967 Protocol and by the 1984 Convention against Torture, ratified by Tunisia, under which the authorities are required to protect him and not to return him under any conditions, in particular in view of the risk of arbitrary imprisonment and ill-treatment to which he is exposed in Algeria.

Consequently, our organizations demand that Tunisian authorities at the highest levels respect their international commitments with regards to the right to asylum and that they ensure that human rights defenders can carry out their legitimate activities without hindrance, regardless of their nationality, including in the context of their bilateral security cooperations.

Action for Change and Democracy in Algeria (ACDA)

Algerian League for the Defense of Human Rights (LADDH)

Association for the Defense of Individual Freedoms (ADLI-Tunisia)

Association for the Defense of Human Rights in Morocco (ASDHOM)

Association for the Promotion of the Right to Difference (ADD-Tunisia)

Association of Moroccans in France (AMF)

Collective for the Families of the Disappeared in Algeria (CFDA)

Collective of Lawyers for Change and Dignity (CACD-Algeria)

Committee for the Respect of Freedoms and Human Rights in Tunisia

Mnemty - Tunisian Association for the Support of Minorities

Organization Against Torture in Tunisia (OCTT)

Psychologists of the World - Tunisia

Taqallam for Freedom of Speech and Creativity (Tunisia)

Tunisian Association for the Support of Minorities (ATSM)

Tunisian Alliance for Dignity and Rehabilitation

Tunisian Federation for Citizenship of the Two Shores (FTCR)

World Organization Against Torture (OMCT), within the framework of the Observatory for the Protection of Human Rights Defenders 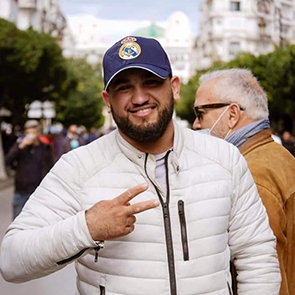