G.N. Saibaba was initially arrested in 2014 and accused of links to banned Maoist organisations. In March 2017, he was convicted under the Unlawful Activities Prevention Act (UAPA) and sentenced to life in prison. An appeal for the suspension of his sentence is pending in the Nagpur Bench of the Bombay High Court. An activist, scholar and professor in the University of Delhi, he is a well-known campaigner for the rights of traditionally oppressed communities, especially Dalit and Indigenous communities, in India. He has spoken out against the violence and discrimination faced by these communities, especially in mineral-rich central India. He campaigned extensively against serious human rights abuses by state-backed Salwa Judum vigilantes and the government security forces, including killings, torture, and, forced displacement, in Chhattisgarh state since mid-2005.

Saibaba has a disability due to polio and other severe health issues including a heart condition, brain cyst, hypertension and breathing difficulties. Family members said that in prison, where he is being held in solitary confinement in a windowless cell, known colloquially as the anda or egg-shaped cell, he has suffered a serious deterioration in his health including rectal bleeding and breathing difficulties, exacerbated by the extreme summer heat in cramped conditions. Prison staff have not made the necessary accommodations in consideration of his disabilities.

Saibaba is kept under constant closed-circuit television (CCTV) monitoring in his cell, violating his right to privacy. The courts have denied repeated appeals for parole and requests for medical bail. The courts have also denied requests to transfer him out of solitary confinement or to move him to prison in Hyderabad city, so he can be close to his family.

Denial of adequate and specialist health care is a serious human rights violation. His condition continues to worsen in jail due to lack of treatment. In 2018, his left arm was paralysed due to nerve damage and the lack of timely treatment. The inflammation has since spread to his right arm and he is no longer able to use his hands for writing or daily functions. Saibaba needs support from two persons for all functions, including sitting up, eating, drinking water and using the toilet, in full view of the CCTV cameras. He is in constant pain in his back, hips and has shooting pains in his left arm. His family said he has not been provided any relief or necessary treatment in jail. He contracted Covid-19 twice in jail, in January 2021 and in February 2022, leading to a further deterioration of his health.

Saibaba’s treatment in prison is a violation of his rights to life, health, privacy and dignity and India’s obligations under international law, especially Article 10 of the International Covenant on Civil and Political Rights. The United Nations Special Rapporteur on Human Rights Defenders has previously called for his release on medical grounds, calling on the “Indian authorities to immediately ensure that Dr. Saibaba has continuous and unrestricted access to health care, including adequate treatment and rehabilitation.”1 The United Nations Standard Minimum Rules for the Treatment of Prisoners recognize the rights of prisoners, including the right to healthcare. Rule 24 states, “The provision of health care for prisoners is a State responsibility. Prisoners should enjoy the same standards of health care that are available in the community, and should have access to necessary health-care services free of charge without discrimination on the grounds of their legal status.” Moreover, the denial of reasonable accommodations for people with disabilities in detention is not only discriminatory but can result in detention conditions that amount to torture or other ill-treatment.

We continue to monitor Saibaba’s health and request immediate intervention in his case. Last year, we made similar appeals regarding the health of 84-year-old Stan Swamy, a human rights defender who later died in custody on July 5, 2021. We believe his death and suffering could have been prevented with timely and humane intervention. The damage to Saibaba’s health could become irreversible, and possibly fatal, if his detention conditions remain unchanged and he continues to be denied timely and adequate health care.

We urge the relevant authorities in India to:

Release him on humanitarian grounds for health reasons.

Pending his release, provide G.N. Saibaba with immediate and ongoing access to adequate health care, move him out of solitary confinement and make reasonable accommodations for his disabilities.

Ensure G N Saibaba is protected from torture and other ill-treatment while in detention, and that he is allowed, without delay, regular access to his family and lawyer.

For the National Human Rights Commission of India to act to ensure G.N Saibaba’s access to adequate treatment, in line with the appeals submitted by his family and civil society.

Ensure human rights defenders in India are able to carry out their human rights work without fear of reprisals, including through misuse of the criminal justice system. 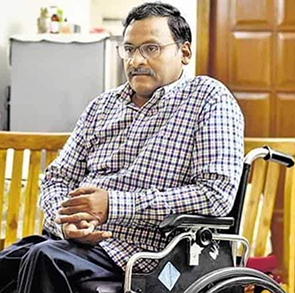