Joint Statement Condemning the Arbitrary Cancellation of the Registration of Odhikar

The Asian Federation Against Involuntary Disappearances, Asian Forum for Human Rights and Development, FIDH and World Organisation Against Torture (OMCT) in the framework of the Observatory for the Protection of Human Rights Defenders and Front Line Defenders strictly condemn the arbitrary cancellation of the registration of Odhikar, by the Bangladesh government.

The NGO Affairs Bureau (NGOAB) in Bangladesh rejected Odhikar’s application for renewal of the registration through a letter issued on the 5th of June 2022 stating that the information/documents required for the renewal of registration of the organisation were not properly furnished. They termed Odhikar’s human rights work as “negative activities” and claimed that the organization’s work on extrajudicial killings, alleged disappearances and other human rights violations in the country is “misleading” and “tarnishing the reputation and image of the state” and thus stating that “there is no opportunity to consider the application for renewal of the registration”.

Odhikar applied for the renewal of the registration in 2014, six month prior to the expiration in 2015 and its application has been pending since. In response to a Writ Petition filed by Odhikar in the High Court Division Bench of the Supreme Court in 2019, the Bench sought an explanation from the NGOAB with regards to its inaction in renewal of registration of Odhikar. The NGOAB responded to the Writ Petition three years later in March 2022. The matter was last heard by the High Court Division bench on 26th May 2022 and the next hearing is scheduled for the 8th of June, 2022. Despite the fact the matter was sub-judice, the NGOAB arbitrarily cancelled the registration.

During the 8th of June hearing regarding this case, the Court was informed that the State wants to bring more allegation against Odhikar and thus sought more time. The next hearing date was not specified.

Odhikar has been documenting human rights violations in Bangladesh since 1994 andhas been producing credible data and information on human rights issues in the country, and it one of the most credible human rights organizations in Asia.

This arbitrary cancellation of its registration is a denial of the right to freedom of association and an attempt to further narrow down the space for freedom of expression. The Government of Bangladesh has used defamatory tactics against Odhikar and its staff, terming their work as criminal and anti-State in nature. Adilur Rahman Khan and ASM Nasiruddin Elan, Odhikar’s Secretary and Director, respectively, have been facing judicial harassment. In addition, Odhikar has been facing restriction on access to funding as all of its bank accounts have been frozen.

We express our solidarity with Odhikar in its struggle to ensure that human rights violations in Bangladesh are monitored, documented and reported without any hindrance and coercion. We urge that the restrictions on freedom of assembly and expression be removed and that human rights organizations be allowed to function independently in the country and thus contribute to establishing a vibrant democracy. 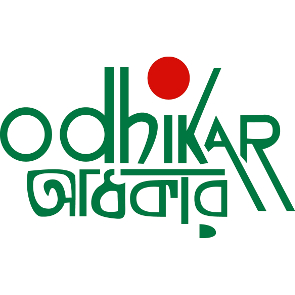