Human Rights Defenders are not criminals

Brussels, November 29, 2016 - Human rights defenders worldwide are regularly subjected to harassment and trumped-up criminal charges aiming at paralysing, intimidating and delegitimising their human rights activities. They face difficulties carrying out their work in increasingly restrictive legislative and administrative environments denying the right to freedoms of association, expression and peaceful assembly. Licences of human rights NGOs have been steadily cancelled, bank accounts seized and their right to access foreign funds violated. A growing number of States have also developed a systematic pattern of obstacles to human rights defenders' freedom of movement, in particular through the use of travel bans, in a clear attempt to isolate them. 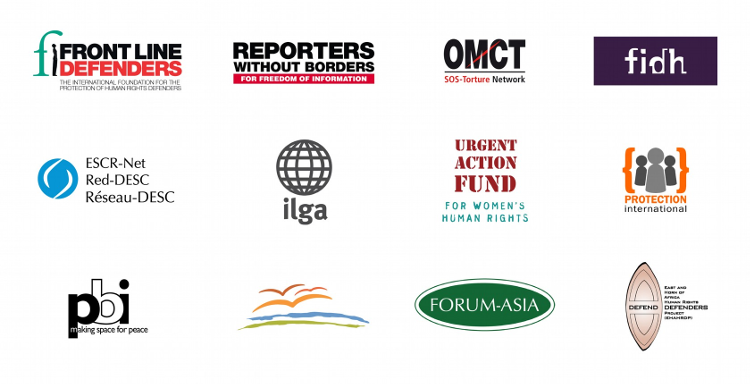 Within the first year of the project, ProtectDefenders.eu, the EU Human Rights Defenders Mechanism implemented by international civil society, has perceived this phenomenon as a worldwide growing trend, which undermines the existence of an enabling environment for human rights defenders.

Only in 2016, as per ProtectDefenders.eu's findings, more than 425 defenders have faced judicial harassment and at least 193 defenders have been charged or sentenced to prison.

The misuse of domestic criminal justice systems and the development of restrictive legislations and regulations against human rights defenders have a threefold impact on their work. Firstly, it practically interferes with their daily human rights activities. It obliges them, for instance, to present themselves regularly to summons, to serve long periods of pre-trial detention or, when convicted, to serve sentences preventing them from pursuing their human rights activities. Secondly, it contributes to the stigmatisation of human rights defenders and organisations depicting them as criminals, therefore delegitimising their positive role in society. Thirdly, criminalisation and judicial harassment of defenders creates a chilling effect on civil society as a whole, specifically within the communities or groups to which the defenders belong, in many cases leading to social fragmentation and isolation of the defenders themselves.

Some groups of defenders have been more frequently the target of criminalisation by State and non-State actors, due to the issues they work on.

Criminal proceedings are often characterized by lack of independence of the judiciary, summary procedures, failure to inform the accused of charges brought against them, obstacles to their right to defence and access to a lawyer, lack of translation and failure to comply with the principle of publicity of the hearings, among other violations.

An increasing number of countries around the world have developed repressive legal environments that undermine the exercise of the right to freedoms of association (including the right to access funding), expression and peaceful assembly. Those restrictions not only violate universally recognised human rights standards, but also seriously impact efforts by civil society to promote and protect human rights and ensure that the voice of victims of violations is heard. These laws and regulations, as well as restrictive official practices and procedures, are very detrimental to the work of NGOs, and result in a limitation of their activities, the criminalisation of their staff and/or even the closure and dissolution of the organisation.

In many countries, these new laws and policies threaten the very existence of a human rights civil society.

ProtectDefenders.eu strongly calls upon all national authorities to:

- Publicly recognise the legitimate and crucial role played by human rights defenders in society and condemn systematically all acts of harassment and violence against them.

- Protect them from any kind of harassment, particularly at the judicial level, so that they are able to carry out their human rights activities without any hindrances.

- Remove all legal and administrative obstacles placed on the activities of human rights defenders.

- Immediately and unconditionally release all arbitrarily detained human rights defenders and drop all charges against them, as their detention only aims at sanctioning their human rights activities.

- Guarantee the right to defence of all detained defenders by lifting obstacles undermining access to their lawyers and putting an end to the practice of depriving defenders from the support of their designated lawyers by calling them as witnesses in the case.

- Investigate in an effective, transparent and independent manner and sanction accordingly all public officials involved in cases of undue use of the criminal system against human rights defenders and guarantee the access to justice and redress to all victims.

ProtectDefenders.eu also calls upon the European Union and its Member States to:

- Publicly recognise the trend of criminalisation of human rights defenders as an urgent issue to address, as one of the biggest threats to the security and the work of defenders, and incorporate this as a priority focus into their human rights advocacy strategy.

- Work on a strategic approach to advance human rights with a global perspective and specially condemn every form of criminalisation of human rights defenders.

- Monitor more closely the trends of criminalisation in countries of concern and systematically observe trials against human rights defenders in countries with presence of EU Delegations.

- Afford special attention to groups marginalised due to their identity -such as women, LGBTIQ, and ethnic or indigenous groups - who are particularly vulnerable to all types of harassment, including criminalisation.