In the name of “fighting terrorism”, Turkish authorities are adopting increasingly restrictive measures against human rights defenders, civil society groups, political opponents and journalists. Local and international rights experts believe that the government is using the language and fear of terrorism to implement wide-spread crackdowns on human rights defenders who are critical to building a strong, stable society. Many local groups have raised concerns over the attacks on freedom of expression and association, as well as human rights abuses and killings of civilians in Kurdish areas, in south-eastern Turkey.

“Respect for human rights has deteriorated at an alarming speed in recent months,”said Nils Muižnieks, the Council of Europe Commissioner for Human Rights, following his nine-day visit to Istanbul, Diyarbakir and Ankara at the beginning of April 2016.

The Commissioner said that while Turkey had the right and the duty to fight terrorism the government should “avoid straying from human rights and rule of law principles in this fight,” expressing grave concerns about the proportionality of counterterrorist measures.

In recent months there have also been attacks on freedom of expression and Turkish authorities have seized or shut down several media outlets. For instance, Jan Böhmermann, a German TV comedian, is facing criminal proceedings after he broadcast a poem mocking Turkish president Recep Tayyip Erdogan. Authorities have opened a total of 1.845 cases against jorunalists and other people accused of insulting the president.

On 15 March 2016, academics Ms Esra Mungan, Mr Kıvanç Ersoy and Mr Muzaffer Kaya were arrested on charges of terrorism and taken into detention, pending an investigation, after they signed a petition calling for an end to violence. The three academics have been subjected to ill-treatment and placed in solitary confinement.

“Recourse to an overly wide notion of terrorism to punish non-violent statements and criminalisation of any message merely coinciding with the perceived interests of a terrorist organisation were not new in Turkey, but the scale has become alarming.”

Since August 2015 Turkey has also launched anti-terrorism operations against the Kurdistan Workers' Party (PKK) militias. In the attacks, civilians living in Kurdish areas have been displaced and killed, but so far authorities have failed to launch an independent and transparent investigation into the killings.

Human rights defenders who openly fight for the rights and freedoms of their communities are not the only ones at risk in Turkey. In several cities, the government has also imposed long and open-ended curfews, which according to the Commissioner are a “massive interference in the rights of the population”, as they affect freedom of movement, the right to education, and the right to health.

“While visiting the site of the murder of Tahir Elçi in Sur, I had a glimpse of the shocking scale of destruction in some of these zones,” said Muižnieks. “The government informed me that 50 terrorists were killed during the operations in Sur, yet at least 20.000 people were displaced, countless buildings were destroyed, and many civilians have undoubtedly suffered greatly because of terrorists and collateral damage”. 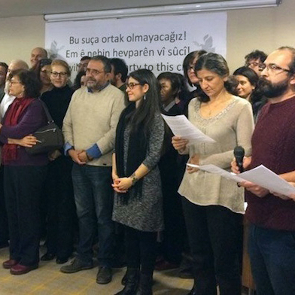