Statement - Mexico: Concern Over Harassment and Arbitrary Detentions against Human Rights Defenders and Environmentalists in Querétaro

Front Line Defenders is deeply concerned about the latest incidents of judicial harassment and arbitrary detentions against human rights and environmental defenders who are members of La Red en Defensa del Agua y la Vida (Network for the Defence of Water and Life) who reject the new Law that Regulates the Provision of Drinking Water, Sewage and Sanitation Services in the State of Querétaro, Mexico.

On 19 May 2022, the Congress of Querétaro expeditiously approved the Law that Regulates the Provision of Drinking Water, Sewerage and Sanitation Services in the State of Querétaro, known as the "Water Law". The approval of the law raises concerns and is questioned by different sections of civil society, including academics, environmental defenders and indigenous communities, due to the potential negative impacts that could result from the concession of their communities' water wells and the risks that are connected with the privatisation of a communal resource.

The Network in Defence of Water and Life was created on 21 May 2022 with the aim of organising the rejection of the Water Law from different social fronts. The Network is currently comprised of representatives from the neighbourhood of San Francisquito, Festival Agua que Corre, Colectivo Bajo Tierra Museo and the indigenous communities of Santiago Mexquititlán, Chitejé de Garabato and San Miguel Tlaxcaltepec in the State of Querétaro.

On 10 June 2022, the Network for the Defence of Water and Life called for a peaceful protest in front of the State Water Commission (CEA) facilities in order to show opposition to the law and ask the authorities for a dialogue. With no response from the authorities, the protesters decided to limit the flow of vehicles on the Avenue 5 de Febrero. Around 1pm the state police tried to disperse the demonstration and started pushing and shoving the protesters. Three human rights defenders and members of the collectives were violently detained.

The detainees were not informed of the reasons for their arrest before arriving at Unit 5 of the State Attorney General's Office, where they were held incommunicado for about three hours. At 9pm the detainees were released without providing them with clear and timely information about their legal status. The Attorney General's Office of the State of Querétaro opened investigation files against the three detainees for crimes against security and the normal functioning of the means of transport, communication routes, disobedience and resistance of private individuals.

On 14 June 2022, the indigenous human rights defender Braulio Ayala García, a member of the Indigenous Confederation of the San Francisquito neighbourhood, was detained by state police while driving his car on the Avenue 5 de Febrero. The municipal police told him to pull over and stop the car, at the same time at least three other patrol cars and officers from the Municipal Public Security Secretariat (SSPM) and the Attention to Victims unit arrived at the scene, claiming that the reason for the detention was a report about the car's number plates. Half an hour later, two patrol cars and a motorbike from the state police and an unmarked car arrived at the scene. About an hour later the authorities let the human rights defender continue his journey.

Front Line Defenders is deeply concerned for the safety of human rights defenders who are members of La Red en Defensa del Agua y la Vida. Of particular concern are the recent arbitrary arrests and judicial harassment as well as the lack of protection measures in the face of recent harassment against those who have demanded the right to consultation, the right to protest and a clean environment in the state of Querétaro. 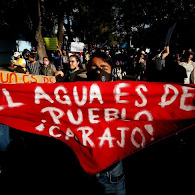