Front Line Defenders is concerned about escalating violence against the Ka'apor indigenous people in the state of Maranhão, Brazil. During the most recent attack, on 22 January 2022, human rights defenders of the Ka'apor indigenous people were pursued by four vehicles on a road in the municipality of Santa Luiza do Paruá. The vehicles were driven by illegal loggers who blocked the road in an act of intimidation.

The indigenous peoples' rights defenders reported that the incident occurred in reprisal for the establishment of the 11th protection area on 18 January 2022, in a deforested region around the Alto Turiaçu indigenous land. On that occasion, the Ka'apor were able to take pictures of the number plates of three of the vehicles and found that two of the vehicles were carrying false plates - the car models did not match the official registrations. One of these vehicles was stamped with the name and number of of a local politician, who is pre-candidate for the state government in the upcoming election to be held in October 2022.

The territory of the Ka'apor people was recognized in 1982. The indigenous land of Alto Turiaçu extends over 530 thousand hectares and is located on the border between the states of Maranhão and Pará in the Brazilian Amazon region. This territory is subject to constant illegal logging, mining and the expansion of agribusiness, facilitated by criminal organizations with the reported support of local politicians.

Since 2013, with the purpose of curbing invasions of the territory and illegal exploitation of the Amazon rainforest, the Ka'apor indigenous people have established zones of protection and agro-forestry production in the areas bordering the indigenous land, near to clandestine roads opened by illegal miners and loggers. These activities to protect the indigenous land have yet to be supported by any public body, including FUNAI, the Brazilian State's indigenist body responsible for enforcing the territorial rights of indigenous peoples. The actions of the Ka'apor communities throughout the territory have been contributing to the reforestation of the region, managing to recover around 80% of the degraded areas. Because of their work protecting the territory and the environment, representatives of the Ka'apor people have been constantly attacked and harassed by illegal loggers and miners.

Since 2015, seven members of the Ka'apor Indigenous People have been killed, among them four indigenous leaders and human rights defenders, namely cacique Eusébio Ka'apor, who was ambushed and killed by gunmen in 2015; Sairá Ka'apor, member of Ka'a usak ha (Ka'apor Self-Defense Guard), stabbed to death in the Betel logging settlement in the municipality of Araguanã in 2016; Jurandir Ka'apor, shot and killed by illegal loggers in 2019; and Kwaxipuru Ka'apor, beaten to death in 2020. To date, investigations have not found those responsible for the killings, reinforcing an atmosphere of impunity that authorises the persecution and extreme violence against indigenous rights defenders that challenge the commercial interests of local politicians, private companies and criminal organisations in the region.

Over the last few years, human rights defenders from the Ka'apor indigenous people have been the constant target of intimidation, defamation campaigns, criminalisation and physical aggression. Currently, 4 members of the Ka'apor indigenous people are included in the Brazilian Protection Mechanism for Human Rights Defenders in the State of Maranhão, but there has been only limited effective assistance in terms of protection and support to formalise complaints of attacks and other types of violence before the competent public bodies.

On March 9th 2022, Bill 191/2020, initiated by President Jair Bolsonaro, was placed on an urgent agenda in the House of Representatives. The bill, which aims to allow mining on indigenous lands and currently considered unconstitutional according to Brazilian Constitution, was reintroduced under the excuse of responding to a possible shortage of mineral fertilisers used by Brazilian agribusiness, which could be in short supply due to the Russian military invasion in Ukraine. If approved, the BIll could put at greater risk Indigenous people and their lands and encourage an increase in mercury poisonings, forced displacement, physical attacks and killings, which would particularly affect those who stand up in defence of the indigenous peoples and the environment.

Front Line Defenders condemns the escalation of attacks and threats against the Ka'apor Indigenous People and their defenders and believes that these are directly related to the legitimate and necessary work carried out by the indigenous leaders in defence of land and environmental rights. Front Line Defenders is deeply concerned by the absence of effective measures to guarantee the physical integrity of the members of the Ka'apor people and their territory, in disregard of the obligations established by the Brazilian Constitution. Front Line Defenders urges local and national authorities to investigate the violations, including physical attacks and killings, committed against the Ka'apor people and indigenous rights defenders in the Indigenous Land of Alto Turiaçu with a view to publishing the results and bringing those responsible to justice in accordance with international standards. 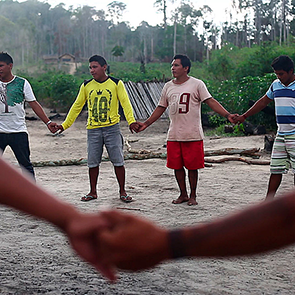