On 24 May 2017, ten rural workers were brutally murdered by police officers on the Santa Lucia farm, Pau D’Arco, Brazil. It was the country’s second largest massacre related to land conflicts in the past 20 years. Since then, survivors and families of the victims have been hiding and living in fear. There has not been any investigation of the intellectual authors of the massacre, the community has not received any protection, and the families risk being evicted.

On the second anniversary of the Pau D'Arco massacre, Front Line Defenders renews its call for justice and for an end to killings of land rights defenders in Brazil. 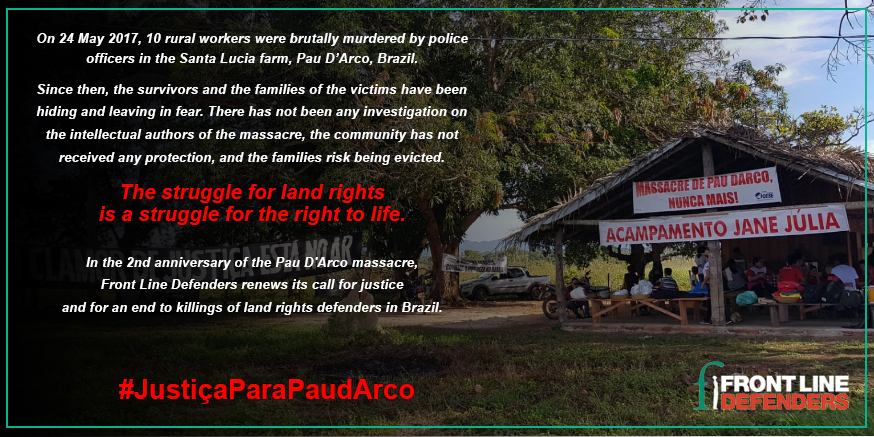 Below, a statement signed by seven Brazilian human rights organisations. For the Portuguese version, click here.

On 24 May 2017, 10 rural workers were murdered on the Santa Lúcia farm in Pará, Brazil. The episode became known as the Pau D'Arco Massacre. 17 policemen, civilian and military, were responsible for the execution of the workers. One of the police officers was cleared of charges. So far, only the executioners have responded to criminal prosecution- and none of them have been arrested. The intellectual authors have not yet been identified.

In addition to the slowness to identify and punish the perpetrators, the area of the massacre- Fazenda Santa Lúcia- remains at the centre of a possessory action dispute. Currently occupied by 200 families of rural workers, some of whom are relatives of victims and survivors of the massacre, the farm had been negotiated for sale to Incra and allocated for agrarian reform. This proposed solution did not result in a positive outcome, as the current administration has said it has no resources. Following on from this, the judge reinvigorated the repossession proceedings and scheduled a hearing to vacate the area for the beginning of June. Consequentially, the 200 families are at risk of being evicted.

An observance will be held in memory of the victims of the massacre on the 24th, starting at 2:00 p.m. The first commemoration will be a visit to and ecumenical service in the cemetery in Pau D'Arco (PA), continuing to the Parque da Paz cemetery in Redenção (PA). On May 26th, at Camp Jane Júlia (Santa Lucia farm), an ecumenical and political event will be held to ask for an end to violence in rural areas. Activities will end with a community lunch.

Exactly two years ago, the bodies of 10 rural workers murdered in Pará were paraded on the truck of state police cars

through the streets of the municipality of Redenção. On 21 May 2017, one woman and nine men had been cowardly executed by police officers inside the Santa Lucia farm, in Pau D'arco.

Despite the fact that this episode has become internationally known as one of the greatest massacres that land disputes have ever produced in Brazil, it remains an impunity. Relatives and survivors are forsaken. There is no news of investigations of intellectual authors.

Santa Lucia farm, the site of the massacre, is still occupied today by 200 families who wish for a piece of land to cultivate. The farm has an order of eviction against it authorized by the Agrarian Chamber of Redenção. At least 10 other communities are on the verge of being evicted in the southern and southeastern region of Pará. Areas of consolidated occupation, such as the Maria Bonita farm in Eldorado dos Carajás, are threatened by the wave of evictions.

The chaos of land titling has always interested the rural oligarchies and the formation of latinfundium. It had been subtly threatened by the creation of the Agrarian Chambers by the Brazil Federal Constitution of 1988, but the process of combating land grabbing has been severely silenced by the Brazilian Judiciary, which under the "best possession doctrine" authorizes successive "repossession" processes in areas with evidence of land grabbing, such as in the case of the Santa Tereza Farm/ Hugo Chavez Camp in Marabá. This is also the reality even in cases of areas that were previously expropriated by the State and destined for agrarian reform. An example of this is the area of Farm 1200. Constituted by concentration of land in a registered settlement area, in violation of the law and therefore occupied since 2006, Farm 1200 is facing imminent eviction due to a repossession process granted to a grileiro (person who takes possession of land by means of false deeds).

Not even the death of ten rural workers in the Pau D'Arco Massacre was enough to inhibit the state from having an agrarian policy with a clear predilection for latifundium. After more than five years of judicial discussion over the legitimacy of the title presented by the alleged owners of the Santa Lúcia Farm area- a family whose lands’ concentration is superior to the one of Belo Horizonte municipality- there has not yet been a conclusive decision on the origin of the title of property, with the possibility of an overlapping of the farm with the Nicolina Riveti registered settlement area. In addition, and in the absence of clarity about land regularity, the State deems that it is fairer for the area to remain in the hands of a single family rather than more than two hundred families.

The survivors and relatives of the victims have not received any support from the State, either of a material nature or psychological support to recover from such a violent crime. A mother who lost two children in the massacre died because she was no longer attended to for serious kidney problems: a clinical condition that was already critical due to the inefficiency of the public health system, combined with a depression, led to a fatal advance of her disease.

The response of the current federal government was to immobilize INCRA (National Institute of Colonization and Agrarian Reform), to detain the Agrarian Reform and to authorise the use of heavy weapons in rural areas. This will further reinforce the animosities in the land conflict, where the social relations between classes were shaped by centuries of violence, inequality and social injustice.

This barbarism has to come to an end. Intellectual authors need to be held accountable! For the mother who buried her son on his own birthday. For the children who were orphaned, and for the survivors who fled through the forest and escaped death that day, but whose lives were forever shattered.

One of the victims, upon witnessing his brother assassinated on the ground, and in a last breath of immense courage, gets up, seconds before being executed - as told by the policemen themselves- and says to the policemen: "I'm going to die standing."

We stand too, to demand the end of impunity and violence in rural areas, for the right to life, to the land and to justice!