On 8 September 2016, the undersigned civil society organisations addressed the following letter to the Permanent Representatives of Members and Observer States of the UN Human Rights Council, to draw their attention to grave violations of human rights in Ethiopia, including the recent crackdown on largely peaceful protests in the Oromia and Amhara regions. As the UN Human Rights Council prepares to convene for its 33rd session between 13 – 30 September 2016, we urge their delegation to prioritise and address through joint and individual statements the escalating human rights crisis in Ethiopia.

An escalating human rights crisis in Oromia and Amhara regions

The situation in Ethiopia has become increasingly unstable since security forces repeatedly fired upon protests in the Amhara and Oromia regions in August 2016. On 6 and 7 August alone, Amnesty International reported at least 100 killings and scores of arrests during protests that took place across multiple towns in both regions. Protesters had taken to the streets throughout the Amhara and Oromia regions to express discontent over the ruling party’s dominance in government affairs, the lack of rule of law, and grave human rights violations for which there has been no accountability.

Protests in the Amhara region began peacefully in Gondar a month ago and spread to other towns in the region. A protest in Bahir Dar, the region’s capital, on 7 August turned violent when security forces shot and killed at least 30 people. Recently, on 30 August, stay-at-home strikers took to the streets of Bahir Dar again and were violently dispersed by security forces. According to the Association for Human Rights in Ethiopia (AHRE), in the week of 29 August alone, security forces killed more than 70 protesters and injured many more in cities and towns across Northern Amhara region.

Since November 2015, Ethiopian security forces have routinely used excessive and unnecessary lethal force to disperse and suppress the largely peaceful protests in the Oromia region. The protesters, who originally advocated against the dispossession of land without adequate compensation under the government’s Addis Ababa Integrated Development Master Plan, have been subjected to widespread rights violations. According to international and national human rights groups, at least 500 demonstrators have been killed and hundreds have suffered bullet wounds and beatings by police and military during the protests.

Authorities have also arbitrarily arrested thousands of people throughout Oromia and Amhara during and after protests, including journalists and human rights defenders. Many of those detained are being held without charge and without access to family members or legal representation. Many of those who have been released report torture in detention. The continued use of unlawful force to repress the movement has broadened the grievances of the protesters to human rights and rule of law issues.
The need for international, independent, thorough, impartial and transparent investigations

Following the attacks by security forces on protesters in Oromia earlier this year, five UN Special Procedures issued a joint statement noting that “the sheer number of people killed and arrested suggests that the Government of Ethiopia views the citizens as a hindrance, rather than a partner”, and underlining that “Impunity … only perpetuates distrust, violence and more oppression”.

In response to the recent crackdown, the UN High Commissioner for Human Rights, Zeid Ra’ad Al Hussein, has called for “access for independent observers to the country to assess the human rights situation”. Ethiopia’s government, however, has rejected the call, instead indicating it would launch its own investigation. On 2 September, in a public media statement, the African Commission on Human and Peoples’ Rights reiterated the UN High Commissioner’s call to allow a prompt and impartial investigation led by regional or international human rights bodies into the crackdown.

There are no effective avenues to pursue accountability for abuses given the lack of independence of the judiciary and legislative constraints. During the May 2015 general elections, the ruling EPRDF party won all 547 seats in the Ethiopian Parliament.

The High Representative of the European Union for Foreign Affairs, Federica Mogherini, who met with Ethiopian Prime Minister Hailemariam Desalegn at the margins of the European Development Days in June 2016, has called on all parties to refrain from the use of force and for a constructive dialogue and engagement to take place without delay. On 28 August, after the EPRDF party’s general assembly, Prime Minister Hailemariam reportedly ordered the country’s military to take any appropriate measures to quell the protests, which he described as illegal and aimed at destabilising the nation. Following a similar call regarding the Oromia protests, security forces intensified the use of excessive force against protesters. 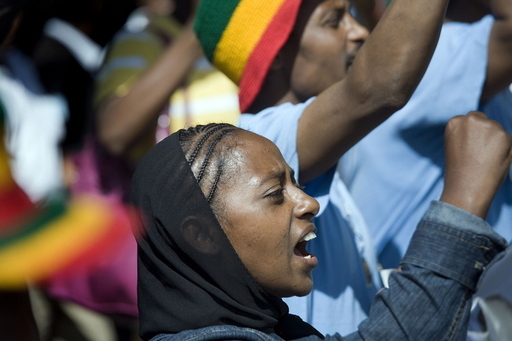 A highly restrictive environment for dialogue

Numerous human rights activists, journalists, opposition political party leaders and supporters have been arbitrarily arrested and detained. Since August 2016, four members of one of Ethiopia’s most prominent human rights organisations, the Human Rights Council (HRCO), were arrested and detained in the Amhara and Oromia regions. HRCO believes these arrests are related to the members’ monitoring and documentation of the crackdown of on-going protests in these regions.

Prominent human rights experts and groups, including the UN High Commissioner for Human Rights, have repeatedly condemned the highly restrictive legal framework in Ethiopia. The deliberate misuse of the Anti-Terrorism Proclamation’s overbroad and vague provisions to target journalists and activists has increased as protests have intensified. The law permits up to four months of pre-trial detention and prescribes long prison sentences for a range of activities protected under international human rights law. Dozens of human rights defenders as well as journalists, bloggers, peaceful demonstrators and opposition party members have been subjected to harassment and politically motivated prosecution under the Anti-Terrorism Proclamation, making Ethiopia one of the leading jailers of journalists in the world.

In addition, domestic civil society organisations are severely hindered by one of the most restrictive NGO laws in the world. Specifically, under the 2009 Charities and Societies Proclamation, the vast majority of Ethiopian organisations have been forced to stop working on human rights and governance issues, a matter of great concern that has been repeatedly raised in international forums including at Ethiopia’s Universal Periodic Review (UPR).

This restrictive and worsening environment underscores the limited avenues available for dialogue and accountability in the country. It is essential that the UN Human Rights Council take a strong position urging the Ethiopian government to immediately allow an international, thorough, independent, transparent and impartial investigation into alleged human rights abuses committed in the context of the government’s response to the largely peaceful protests.
As a member – and Vice-President – of the Human Rights Council, Ethiopia has an obligation to “uphold the highest standards” of human rights, and “fully cooperate” with the Council and its mechanisms (GA Resolution 60/251, OP 9). Yet for the past ten years, it has consistently failed to accept country visit requests by numerous Special Procedures.

During the upcoming 33rd session of the Human Rights Council, we urge your delegation to make joint and individual statements reinforcing and building upon the expressions of concern by the High Commissioner, UN Special Procedures, and others.

Specifically, the undersigned organisations request your delegation to urge Ethiopia to:

1. immediately cease the use of excessive and unnecessary lethal force by security forces against protesters in Oromia and Amhara regions and elsewhere in Ethiopia;
2. immediately and unconditionally release journalists, human rights defenders, political opposition leaders and members as well as protesters arbitrarily detained during and in the aftermath of the protests;
3. respond favourably to country visit requests by UN Special Procedures;
4. urgently allow access to an international, thorough, independent, impartial and transparent investigation into all of the deaths resulting from alleged excessive use of force by the security forces, and other violations of human rights in the context of the protests;
5. ensure that those responsible for human rights violations are prosecuted in proceedings which comply with international law and standards on fair trials and without resort to the death penalty; and
6. fully comply with its international legal obligations and commitments including under the International Covenant on Civil and Political Rights, the African Charter on Human and Peoples’ Rights, and its own Constitution.