In the fertile lands of Gambela, in western Ethiopia, local indigenous populations have been planting their crops for hundreds of years.

In 2012, the Ethiopian government launched its “villagisation” scheme, in which tens of thousands of people were relocated from their ancestral lands to make way for large-scale commercial agriculture. Foreign investors benefited at the expenses of the local population. Indigenous peoples lost livelihoods and lands.

Human rights defender and church leader Omot Agwa Okwoy was one of the most outspoken critics of this policy. Omot promotes the rights of indigenous communities and local people living in Gambela. He has criticised land-grabbing, deforestation and other land exploitation projects in the region, and has helped those who have been affected by the bloody conflict between different ethnic groups, especially in the villages near Ethiopia’s border with South Sudan. Omot also advocates for the establishment of national parks in the region, to protect the environment and to prevent land degradation.

Because of his work defending indigenous peoples’ land rights in Ethiopia, Omot was arrested, charged with terrorist activities, held incommunicado for almost two years, and tortured.

On World Earth Day, Front Line Defenders honours the struggle of Omot Agwa Okwoy and the other environmental defenders across the world, who dedicate their lives to oppose the reckless exploitation of natural resources and to protect the water, the land, the air and the forests, which are vital for the survival of their local communities. 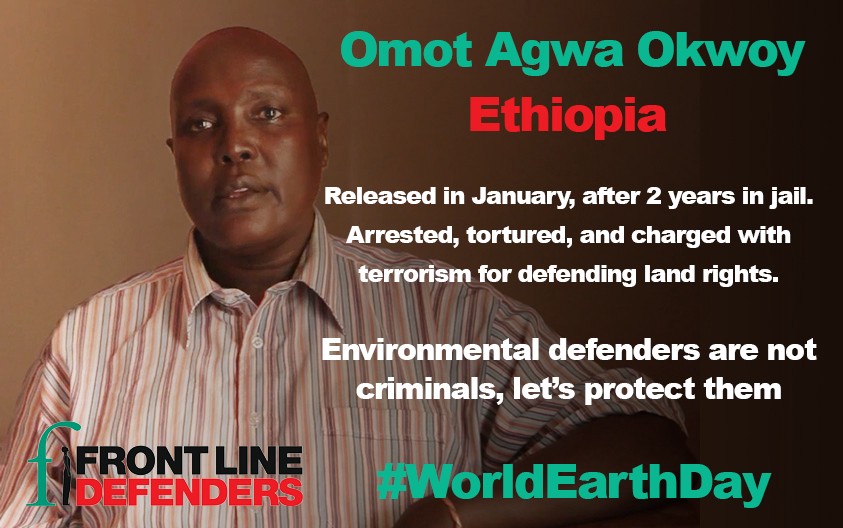 Under attack for protecting the Earth

Environmental rights defenders often challenge large multinational corporations and go against the interests of the most powerful political and economical elites of their countries. Because of their courageous work, they face threats, physical attacks, judicial harassment, criminalisation and killings.

“I am extremely worried and appalled by the growing number of attacks and murders of environmental defenders. (…)We should listen to those who raise the alarm against environmental disasters, climate change and irresponsible resource exploitation, not repress them.”

In its 2016 annual report, Front Line Defenders documents that almost half of the 282 human rights defenders murdered in 2016 were working on land, indigenous and environmental rights. Killings were generally preceded by intimidation, threats and attacks. Criminalisation is another common strategy used by authorities to silence human rights defenders and discredit them.

Because of his work, in 2015 Omot was jailed on trumped-up charges. He was released on 17 January 2017, after almost two years in detention. The human rights defender was held in Kulinto prison, 700 km away from Gambela and his family. Every night for the first six months of his detention, Omot was subjected to torture. Additionally, during his first three weeks at Maekelawi police station, he was held incommunicado in solitary confinement in a small, dark room where he could not differentiate between day and night.

Omot was arbitrarily arrested on 15 March 2015 , along with activists Ashinie Astin and Jamal Oumar Hojele, while travelling to Kenya to attend a food security workshop. In September he was charged under the anti-terrorism law: Ethiopian authorities considered a food security workshop a form of “terrorist activity”. Although the terrorism charges have been dropped, Omot will have to appear before the court for another hearing in June 2017, when a final decision will be announced.

Before their arrest, Omot, Ashinie and Jamal had been speaking out against the human rights violations related to the “villagisation” project. In the past ten years, Ethiopia has made millions of hectares of land available to domestic and foreign investors. The government considers these lands “empty”, despite the presence of local indigenous populations such as the Anuak or the Majang.

The Ethiopian authorities claim the relocation program was voluntary and that the resettled communities were provided with housing, health facilities and schools. However, local human rights defenders and international NGOs have reported that the evictions were all but voluntary: indigenous people suffered intimidation, beatings, arbitrary arrest, torture, rape and extra-judicial killings. Moreover, the services promised by the government were never provided.

Despite the evidence of widespread human rights abuses, major donor countries and institutions — including the EU and the World Bank — have continued to invest huge sums in major development projects in Ethiopia.

On paper these projects were designed to grant the local communities better access to food, health and education. Local activists, however, say that the situation has only worsened: entire forests have been cut down to make space for new crops, which are not produced to feed the local people but rather for export. The local population, whose livelihood depended mainly on small-scale farming and hunting, is increasingly relying on food aid programs.

What’s happening in Ethiopia is not unique: land-grabbing and deforestation are global phenomena. From the Philippines to Brazil, every day environmental defenders (including pastors and religious leaders like Omot) are taking high risks to fight against and prevent the exploitation of natural resources and the destruction of the environment. To protect the Earth, its resources, and the people who survive off them, Front Line Defenders is calling for increased support for the environmental defenders who are risking their lives to save the land.