Their Voices Won’t Be Silenced

On 17 April, Kazim Kizil went to film a protest in Izmir, Turkey. People were demonstrating against irregularities in the voting process for the constitutional referendum, which granted president Recep Tayyip Erdogan new sweeping powers.

The rally didn’t last long. Police intervened and detained around 20 people. Kazim was one of them. His camera was seen as a threat: the Turkish authorities did not want anyone documenting the crackdown.

The rally didn’t last long. Police intervened and detained around 20 people. Kazim was one of them. His camera was seen as a threat: the Turkish authorities did not want anyone documenting the crackdown.

A photographer and video-activist, Kazim has been filming stories of struggle and resistance since 2005, and documenting human rights abuses in Turkey. For years, he has known he could be arrested because of his work.

Across the world, human rights journalists like Kazim are using their words and their pictures to hold the authorities accountable, to document and try to prevent human rights violations, to support nonviolent protests and social movements and to fight for the right to freedom of expression.

Human rights journalists are arrested, defamed, criminalised and attacked. But across the world, they continue writing, filming, publishing, and taking photos of what oppressive regimes work so hard to hide.

Kazim Kizil is a documentary film-maker and video-activist. During the Gezi Park protests in 2013, he launched a citizen journalism network called Kamera Sokak, with the aim of documenting social resistance movements. In 2015 he filmed the documentary “The Tree of Eternity: Yırca Resistance”, which tells the story of the villagers of Yirca, who successfully opposed the construction of a thermal plant in order to protect their olive trees and their land. Kazim has also produced several short films on human rights issues, including refugees, climate change and child labour.

According to his colleagues, “he participated in every form of resistance, demonstration, and social movement with his camera — becoming the eyes and ears of all who could not be there”.

Since he was arrested on 17 April, Kazim has been held in pre-trial detention at Menemen Prison. Four days after his arrest, he was charged with “insulting the president”: according to the prosecutor, some of his tweets sent before the protests contained derogatory comments towards Erdogan. The authorities haven’t told him how long he could be held in prison or when the trial would start.

Since the attempted coup in July 2016, the human rights situation in Turkey has dramatically deteriorated. Freedom of expression is severely restricted and, according to the Committee to Protect Journalists, 81 journalists were jailed in 2016 — more than in any other country. According to Amnesty International Turkey, thre are currently 120 journalists in jail.

More than 175 media outlets were closed in the space of five months and many media organisations now practice self-censorship in order to survive. On 29 April, Turkish authorities even banned Wikipedia, stating the website could be considered “a threat to national security”. Because of Turkey’s overly broad definition of terrorism, scores of human rights defenders and journalists have been arrested and charged with terrorism-related offences, often for speaking out about the Kurdish issue. 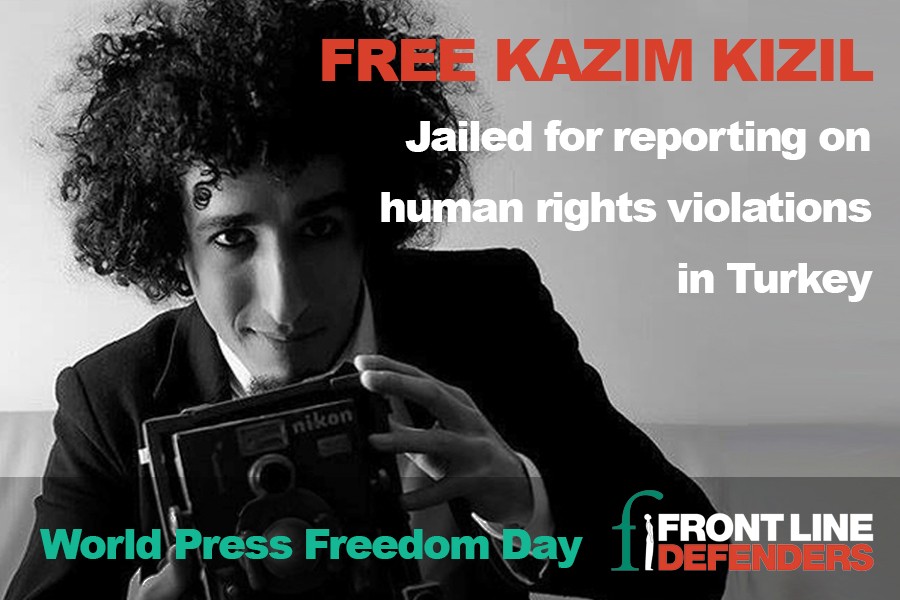