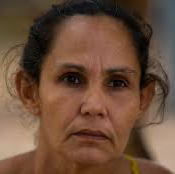 Maria Marcia Elpídia de Melo is a land rights defender from Novo Progresso, Pará, in the Brazilian Amazon region. She is the President of the Rural Producers’ Association of Nova Vitória (Associação de Produtores e Produtoras Rurais de Nova Vitória), located in the Sustainable Development Project Terra Nossa (Projeto de Desenvolvimento Sustentável Terra Nossa). The Terra Nossa (“our land”) project was formed as an agrarian reform settlement since 2006, as a means to combat illegal deforestation. The Terra Nossa Project is the settlement that has seen the largest numbers of arson attacks in 2019, when hundreds of square kilometres of the Amazon forest were burnt.

Maria Marcia Elpídia de Melo has faced a number of threats against her life and her son’s life since 2018, due to her role as a woman human rights defender and as the leader of the Rural Producers’ association. In 2018, after her son was violently beaten as a threatening message to Maria Marcia Elpídia de Melo, she had to arrange for him to leave. The defender receives daily death threats, and her domestic animals such as dogs and chickens have been killed to intimidate her.

The defender is also being criminalised due to her human rights work, in which local authorities falsely accuse her of slander and defamation. There is also a smear campaign conducted in the mainstream media against her, that falsely portrays Maria Marcia Elpídia de Melo as opposing progress in the region.

As President of the Association, Maria Marcia Elpídia de Melo has brought forward a number of complaints on human rights abuses and irregular activities carried out by mining, logging and cattle business. As a result, the woman human rights defender was threatened by individuals associated with national and international extractive businesses, land grabbers, police officers, and even local politicians.