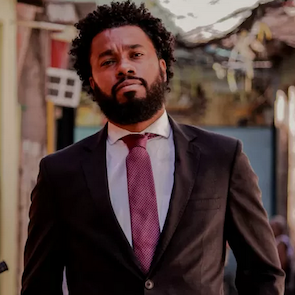 "As a black man, when I speak out against the prison system, I don't speak in any abstract sense. I speak about a machine that I know and that could grind my body"

Joel Luiz Costa is a lawyer and human rights defender in the city of Rio de Janeiro. He is the founder of the Institute for the Defence of Black People (IDPN), which seeks racial equity through the defence of the black population in the criminal sphere.

He is a member of the Human Rights Commission of the Brazilian Bar Association of Rio de Janeiro, the Favelas na Luta movement and the Right to Memory and Racial Justice initiative.

Joel Luiz Costa is one of the first black lawyers to form the front lines in legal support of protests for racial justice in the Rio de Janeiro city, such as the "Black Lives Matter" events and protests against the killing of a black man in a large supermarket chain.

He is one of the founders of the Independent and Communal Learning Centre, (NICA), an anti-racist, multicultural and democratic project of education as the main tool for social mobility. In addition, Joel is part of the Forum Grita Baixada; of REFORMA - a legal network for drug policy reform; and a columnist for the Favela News Agency. His legal career is distinguished by the defence of favela and marginalized neighbourhoods residents in cases of police violence and other human rights abuses.

Human rights defenders like Joel are constant targets of threats and intimidation because of their work in the fight against racial inequality in Brazil; By monitoring and demanding justice in cases of police violence,these defenders and social movements are targets of a false narrative that tries to link those who speak out against police abuses to organised crime, in order to attack their legitimate work in defence of human rights. This reality that not only discriminates, but criminalises those who work towards a better reality for black and marginalised people in the country.