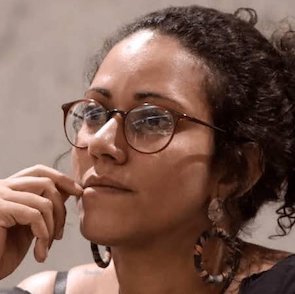 There is an urgency to change the standpoint that has reference, that has credibility, that has power, because many are the strategies of racism and sexism to discredit us.

Ingrid Assunção Farias is a woman human rights defender and harm reducer in the city of Recife, Pernambuco. She has been working for over 12 years with harm reduction policies for substance dependents and providing support to homeless people and those who are in social vulnerability. Ingrid is a transgender rights defender and sex worker rights defender. She is also one of the national coordinators of the National Network of Antiprohibitionist Feminists - RENFA and part of the Black Network of Pernambuco and the Black Coalition for Rights.

She is a woman from the north-east region, black, marginalized, and mother, who together with other anti-prohibitionist women human rights defenders works to build perspectives and actions for a drug policy that is critical of racism, mass incarceration, police violence, and genocide of the black population.

In a context where the Brazilian State's drug policy is accompanied by police operations targeting black people and those living in favelas and marginalized communities, the work of prevention and care as a strategy, in contrast to violent and segregating policies, is fundamental to guarantee respect for human rights and the strengthening of democracy.

Women human rights defenders like Ingrid are the target of harassment and intimidation via social media through the misuse of their images as a mean to discredit their work in defence of human rights. Because of their actions in defence of respect for the citizenship of marginalised populations, these defenders and the groups they are part of are targets of false narratives that not only discriminate those who work for the expansion of human rights, but also criminalise those who fight for a better reality for the most vulnerable people.