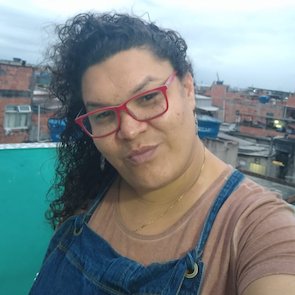 The challenge is to EXIST with the political regression and with the increase in murders of trans people. I am not able to see a favourable scenario for our segment of society, but I do think the only form of participation is at the ballot box and in our daily struggle. I understand the we, the trans population, must be inside the buildings that shape the policies that affect us.

Gilmara Cunha is a trans woman from the Favela of Maré in Rio de Janeiro. She is the founder and general coordinator of Conexão G, a civil society organisation that has been working since 2006 with the mission of fighting for public policies on human rights, health, public education and security for LGBTI+ people living in the favelas.

The context where Gilmara works is extremely challenging. The favelas are affected by high levels of violence, including by police. On the morning of 19 November 2019, Gilmara Cunha reported on Facebook that her house had been hit with shots at dawn. The cause of the shooting was one of the police operations that frequently occur in the favelas under the pretext of fighting drug trafficking. From January to August 2019 alone, there were 1,144 deaths caused by police officers, an increase of 18% over the previous year. In September 2019, the 1st LGBTI Culture and Citizenship Festival of Favelas, organized by Gilmara’s organisation, was forced to interrupt its activities due to a police operation in the Favela of Maré. Two inhabitants were killed during the operation, which lasted approximately 20 hours. People who attended the event had to remain locked up until the shooting ceased.

Also known buy its very high rates of homophobic and transphobic violence, Brazil is the country with the highest number of murders of trans people in the world.iv According to Grupo Gay da Bahia, 420 LGBTI+ people were killed in 2018, of which 163 were trans. A total of 1650 LGBTI+ people were reported killed in Brazil between 2014 and 2019.

Gilmara continues her inspirational work in spite of this extreme violence, focussing on ensuring support for LGBTI+ people in some of the most deprived areas of Rio de Janeiro. Gilmara believes that what sensitises people is the daily contact with others: “Close relationships can cause transformation within a person. And that person can become an agent, a promoter, and create a network that sensitises others. Words can persuade, but actions stick. If today we have this organisation and others who believe in LGBT rights and issues, that’s a transformation.”

Conexão G was born with the mission of creating a long term project for Maré and other favelas. Its conceptual axes are human rights and the promotion of the health of this population in the community space. Conscious of the necessity to mobilise a significant number of people, Conexão G, as the name suggests, seeks to organise a collective and articulated action: to build a high impact project to combat the incidence of low-esteem in the trans population. This is centered in the goal of transforming our local reality and the realities in other spaces within the favela.

Brazil also continues to be an extremely dangerous place for lesbian, gay, bisexual, transgender and intersex (LGBTi) rights defenders as it maintains the top position in the world ranking of homophobic murders, registering 44% of all killings worldwide.