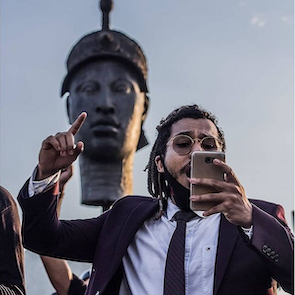 Djeff Amadeus is a lawyer, writer and human rights defender in the Rio de Janeiro. He is a member of the Unified Black Movement (MNU) and coordinator of the Institute for the Defense of Black People (IDPN).

Djeff Amadeus was one of the first black lawyers to take the front lines in legal support of protests for racial justice in the city of Rio de Janeiro, such as the "Black Lives Matter" events and protests against the killing of a black man in a large supermarket chain.

Djeff Amadeus' legal career has been known for his defence of favela residents and marginalized neighbourhoods in cases of police violence and other human rights abuses. During a public hearing on the ADPF of the favelas, Djeff Amadeus held the first one-minute silence in the history of the Brazilian Supreme Court.

Djeff Amadeus is the author of the books Ensaios sobre Processo Penal, Hermenêutica e a crise de paradigmas no direito brasileiro and Guia de Processo Penal Estratégico. He teaches as a volunteer in public schools and community based courses, and has been a columnist for local media outlets such as Conjur, Carta Capital, Mídia Ninja, Jornal247, GGN, Brasil de Fato, Justificando, among others.

Human rights defenders like Djeff are constant targets of threats and intimidation because of their work in the fight against racial inequality in Brazil; By monitoring and demanding justice in cases of police violence, these defenders and social movements are targets of a false narrative that tries to link those who speak out against police abuses to organised crime, in order to attack their legitimate work in defence of human rights. This reality that not only discriminates, but criminalises those who work towards a better reality for black and marginalised people in the country.