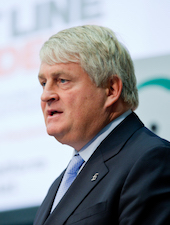 Denis O'Brien is chairman and co-founder of Front Line Defenders, which he helped establish in 2001 to meet the immediate security and protection needs of human rights defenders at risk around the world. From its start in Ireland, Front Line Defenders now employs 50 staff with offices in Dublin and Brussels, and regionally-based field staff in the Americas, Asia, Africa, Europe, Central Asia and the Middle East.

Mr. O'Brien is one of ​​Ireland’s leading entrepreneurs​​ with extensive investments across several sectors, including communications, healthcare and media. Mr. O'Brien has started multiple businesses throughout his career, the first being Communicorp in 1989. In 1991, he started Esat Telecom, a mobile phone company that went on to become Ireland’s second-largest service provider. In 1998, he was voted Ireland’s Entrepreneur of the Year in the inaugural running of the worldwide competition organised and sponsored by Ernst & Young.

In 2001, ​he launched Digicel Group​, a mobile phone network, in Jamaica. Since then, Digicel has expanded to become a Digital Operator with operations in more than 31 markets throughout the Caribbean, Central America and Asia Pacific. He has also made successful exits from multiple ventures, including the sale of Esat to BT Group in 2000 and the 2021 sale of Communicorp. Mr. O’Brien is a director of a number of private companies which hold some of his other business interests, including Quinta do Lago SA.

In addition to co-founding Front Line Defenders, Mr. O’Brien has founded and supports a number of other philanthropic organisations. In 2000, he established The Iris O’Brien Foundation to assist disadvantaged communities in Irelandand internationally. Four years later, h​​e helped create the Digicel Foundation,​​ which supports thousands of projects in the Caribbean and Pacific. The Digicel Foundation, to date, has invested US$156 million into philanthropic initiatives. He also sits on the board of Concern Worldwide, an Irish humanitarian agency.

Mr. O'Brien earned his bachelor’s degree from University College Dublin (UCD) and his MBA from Boston College. He is a benefactor at both schools, having provided the financial support for the O’Brien Centre of Science at UCD and endowed the D​​enis O’Brien Fellowship​​ for Irish students at Boston College’s Carroll School of Management.