Peaceful Resistance of the Microregion of Ixquisis

The "Peaceful Resistance of the Microregion of Ixquisis," a Human Rights Defenders Communities of Guatemala was presented with the 2018 Front Line Defenders Award for the Americas

The human rights defenders communities of Guatemala, the “Peaceful Resistance of the Microregion of Ixquisis”, has been given the 2018 Front Line Defenders Award for Human Rights Defenders at Risk for the Americas region, in recognition of their collective effort and peaceful fight for their rights to the territory and environmental justice. 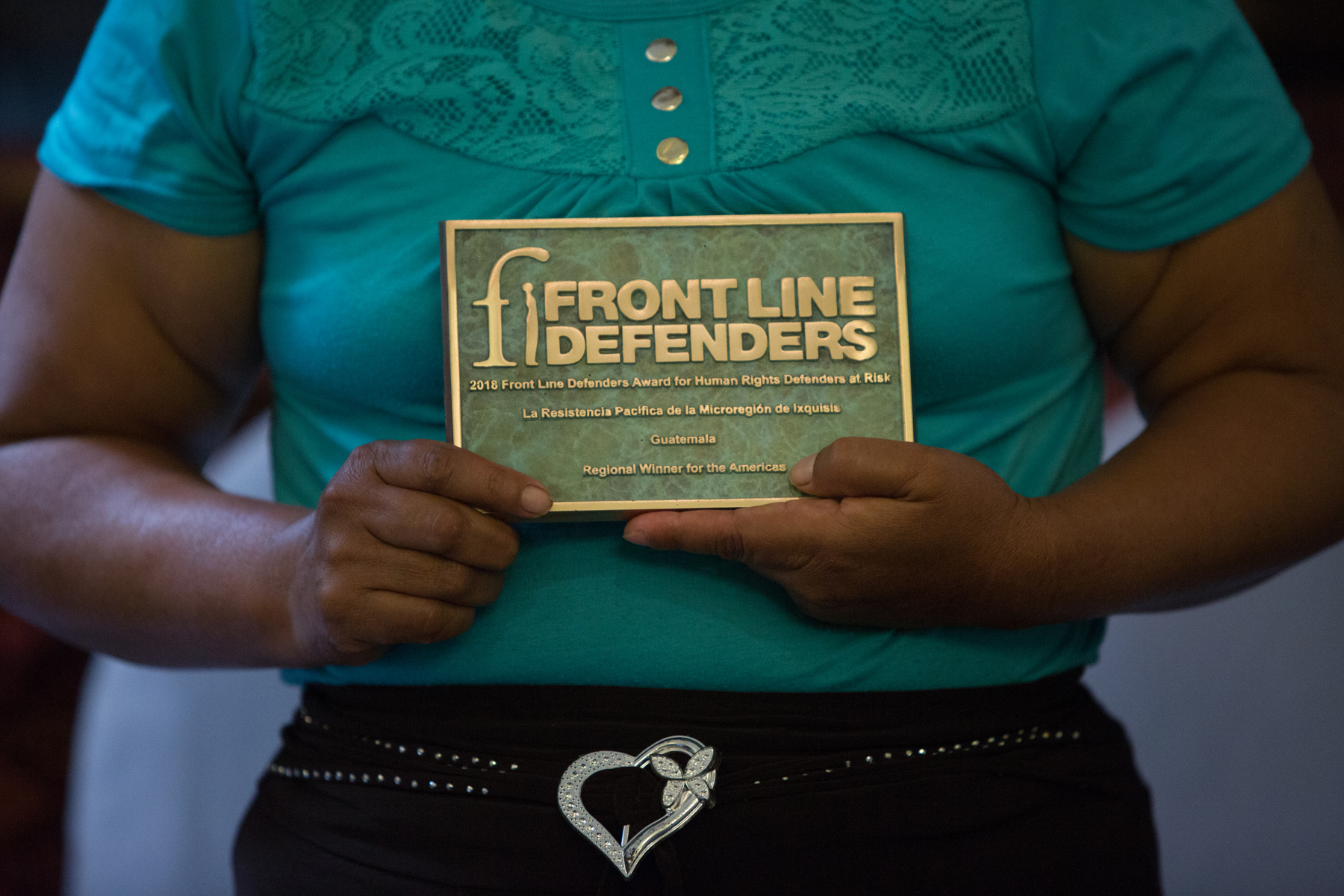 The award was presented by Emma Achilli, head of Front Line Defenders’ Brussels office at a ceremony in Guatemala City on 7 June. Achilli presented members of the community with a plaque and reiterated the importance of the Peaceful Resistance of the Microregion of Ixquisis’ legiitmate work in the defense ofhuman rights, land rights and their livlihood.

Since 2005, The Front Line Defenders Award has been presented annually to those defenders of human rights who, at great personal risk, have made an exceptional contribution to the protection and defence of the rights of their communities. Historically this prize has been awarded to one defender or movement each year. This is the first time in its’ 13-year history that the Front Line Defenders Award for Defenders of Human Rights at Risk was granted to a collective that defends territorial and environmental rights in Guatemala. 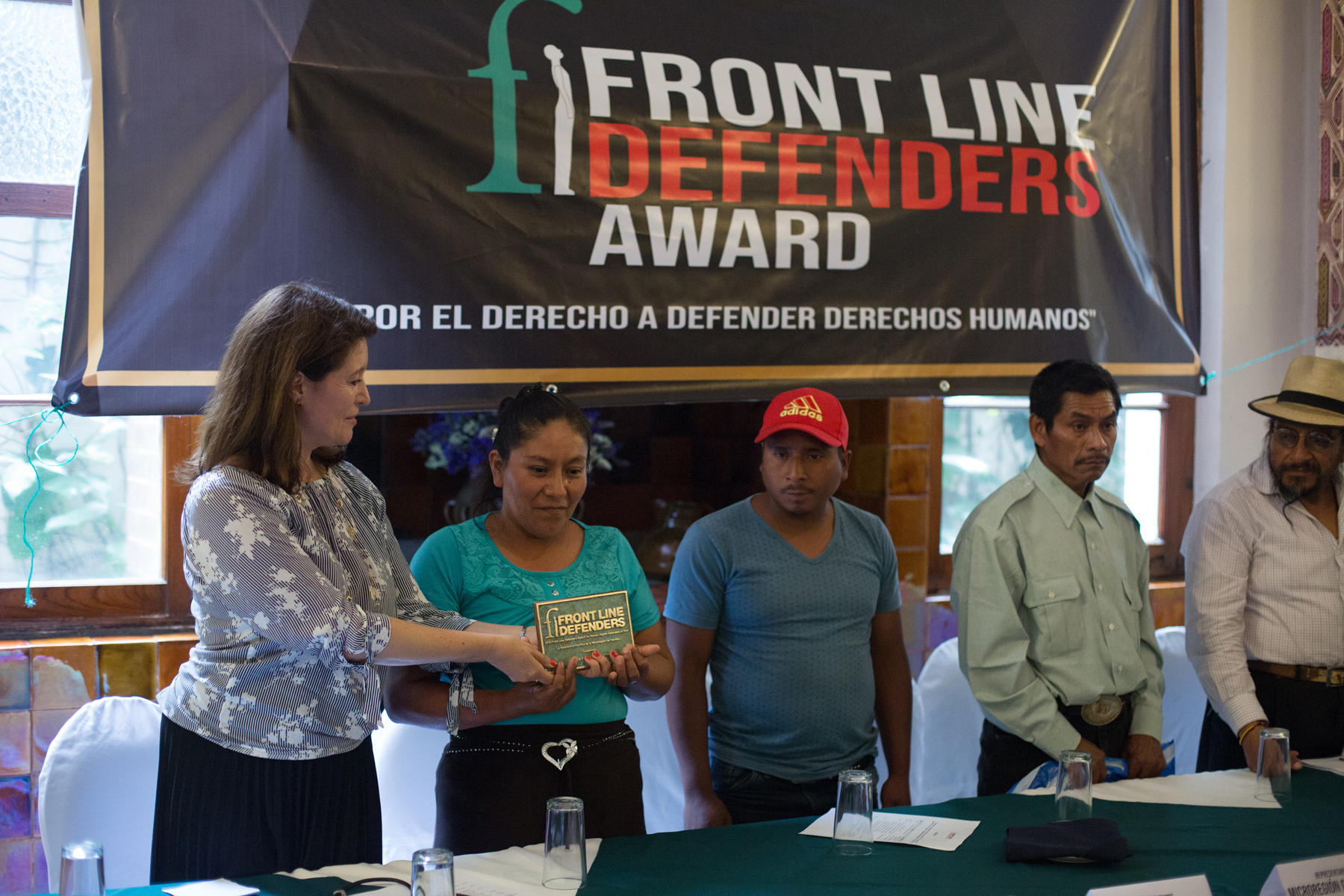 "The Award demonstrates that these defenders have the support of the international community, that their sacrifices have not gone unnoticed and that we stand in solidarity with their unrelenting bravery."

"Although governments and corporations work to discredit and belittle the peaceful work of the defenders of human rights, activists all around the world tell us that international visibility and recognition is a critical protection tool," said Andrew Anderson, Executive Director of Front Line Defenders, last May 18th. Front Line Defenders is an international human rights organisation based in Ireland which has, since 2001, been dedicated to the safety and protection of human rights defenders all over the world.

More about Peaceful Resistance of the Microregion of Ixquisis

The human rights defenders community, the Peaceful Resistance of the Microregion of Ixquisis works in response to the grave violations of human rights committed in Guatemala in the name of economic development. The government gave the green light to hydroelectric megaprojects that have been causing environmental and social damage in the region, despite the widespread opposition of the 12 communities of the Microregion, in disagreement with the construction of the hydroelectric dams Pojom I, Pojom II and San Andrés, projects carried out by the company Energía y Renovación SA (previously called Promoción y Desarollos Hídricos S.A) and financed by multilateral and development banks. There has been no prior free and informed consultation of the affected indigenous communities, in violation of Convention 169 of the Labour Organization (ILO) on the rights of Indigenous and Tribal Peoples, ratified by the State of Guatemala in 1996. By means of a Community Consultation held in good faith in 2009, 99% of the population of the entire municipality of San Mateo Ixtatán voted against the granting of licenses for the recognition, exploration and exploitation of natural resources in its territory, due to the serious impact on the environment, livelihoods and subsistence of communities.

Due to the defence of their rights, by means of public complaints and peaceful demonstrations, the defenders belonging to “Peaceful Resistance” face threats, violence and sexual harassment, intimidation, “surveillance, physical aggressions, constant smear campaigns, stigmatization and discredit in local and national media as well as in social networks, strategies aimed at dividing the community and strong militarization in their territory as a result of their defence of rights regarding the land, the territory and the environment.

In 2017 alone, over 75 attacks against defenders belonging to “Peaceful Resistance” were reported. “These included killings, shootings, harassment and smear campaigns. On the 17 May 2017 Sebastian Alonso Juan, a native of Yulchen Frontera, San Mateo Ixtatán, was murdered while taking part in a peaceful demonstration in the microregion of Ixquisis. This crime has not yet been solved.

The representative of the Departmental Assembly of the Peoples of Huehuetenango, stressed that the communities are not against development, but that they expect their desire to live in their territory according to their customs to be respected.

“This award is a message for all resistances, both regionally and throughout Guatemala as a whole, not only in Ixquisis but in Santa Cruz Barillas, Santa Eulalia, in the Q'eqchi communities, in La Puya and in other resistances on a national level ", declared Francisco Simón Francisco, member of “Peaceful Resistance”, after the announcement of the Award, "It is a clear example, a recognition of the resistance of the indigenous peoples of Guatemala, particularly that of the communities and indigenous women. May this recognition motivate them to continue resisting in a peaceful manner according to the cultural norms of the indigenous peoples, who are living a situation of exclusion and marginalization and who are seen as enemies of development”.