About Martín Gómez Vásquez
Status:
Attacked, threatened
About the situation 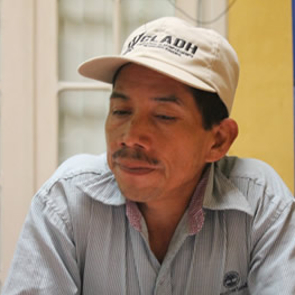 Martín Gómez Vásquez is a leader of the Movimiento Indígena Lenca de La Paz Honduras (Lenca Indigenous Movement of La Paz, Honduras - MILPAH). MILPAH is an organisation that advocates for the rights of Lenca indigenous peoples in La Paz, amongst others by seeking the application of International Labour Organisation (ILO) Convention 169 on the right of indigenous peoples to previous and informed consultation. Martín Gómez Vásquez is a beneficiary of precautionary measures granted by the Inter-American Commission on Human Rights on 24 November 2015; the measures benefit several members of MILPAH and the Indigenous Council of San Isidro Labrador, including 2016 FLD Award for Human Rights Defenders at Risk laureate Ms Ana Mirian Romero.

The attackers threw stones at the human rights defender and verbally attacked him. Martín Gómez Vásquez was able to escape the scene but before being out of reach he heard the attackers speak on the phone saying they would come to his house that evening to harm him and his family. The two individuals then proceeded to report the incident to the police as if Martín Gómez Vásquez had attacked them instead. On the meantime, the human rights defender had reached out to the point of contact in the police in charge of implementing the precautionary measures assigned to Martín by the Inter-American Commission on Human Rights. This prompted a call from the police authorities in Tegucigalpa who requested that a patrol from Marcala guard Martín Gómez Vásquez and his family throughout the night, an order that was followed promptly and provided effective protection for that short period. The attackers have not been prosecuted for their acts.

MILPAH works closely with the Indigenous Council of San Isidro Labrador to defend the rights of the local Lenca indigenous communities. In particular, both organisations have contested the construction of a hydroelectric generator on river Chinacla, on which local communities strongly depend for their survival. MILPAH and the Indigenous Council of San Isidro Labrador contend that the hydroelectric project would compromise the survival of local communities as they depend on the river to irrigate subsistence and cash crops as well as relying on it as a source of water and fish. They also demand that their right to previous and informed consultation is respected; as it is protected by ILO Convention 169 to which Honduras is a party to.

Mayor Víctor Ventura is a supporter of the hydroelectric project that the private company Los Encinos S.A. is seeking to build on river Chinacla, just like his predecessor. On 18 October 2013 the former Mayor of Santa Elena, Alexis Ventura Vásquez, granted permission to conduct a feasibility study to the company Los Encinos S.A., without previous consultation of the affected communities. According to the minutes of the Municipal Corporation of Santa Elena, the sole director of the Los Encinos S.A. is Mr Arnold Castro, husband of Ms Gladys Aurora López, current deputy from the National Party and Vice President of Congress.

On 10 July 2016, just five days previous to the attack against Martín Gómez Vásquez, MILPAH with the support of the Honduran Centre for the Promotion of Community Development (CEHPRODEC) conducted a consultation across the municipality of Santa Elena to determine the level of support from the general population for the construction of the hydroelectric project on river Chinacla. The result of the consultation revealed that 92.9% of voters opposed the construction of the project, with 4,7% of votes being void. International observers from the Office of the High Commissioner for Human Rights in Honduras, Peace Brigades International and Trocaire accompanied the voting process as well as several Honduran civil society organisations. There were several efforts that apparently came from the office of the Mayor to prevent the consultation from taking place and to prevent participation from all districts in the municipality, including calls to community leaders to threaten them with withdrawing subsidies and cancelling development projects if their communities participated in the consultation.