Italy: The Government Should Stop Prosecution of Migrant Rights Defenders

German human rights defender Carola Rackete is the captain of the humanitarian ship Sea Watch 3, which belongs to the homonymous German NGO. The Italian prosecutors summoned Rackete for interrogation on 9 July, after opening an investigation on charges of aiding illegal immigration, punishable with up to 15 years in jail.

Migrant rights defenders do crucial work defending the most vulnerable and literally saving lives. Criminalising them effectively means endorsing a policy of death.

On 29 June 2019, Rackete was arrested for docking in the port of Lampedusa, Sicily, to disembark 42 migrants who had been rescued two weeks earlier off the Libyan coast, defying a ban by the Italian interior minister Matteo Salvini. The human rights defender was initially put under house arrest, on charges of breaking an Italian naval blockade (under the recently approved decree known as Salvini bis) and for accidentally ramming a police boat that was trying to block her manoeuvrers.

However, on 2 July a judge in charge of preliminary investigations ruled that Rackete had not acted against the law, stating that the new decree could not be applied to humanitarian rescue operations. The decree introduced new measures against migrant rights defenders, including fines of up to €50,000 and the confiscation of vessels.

In her decision, the judge also declared that Rackete was "doing her duty saving human lives”. Rackete had decided not to disembark the migrants in Libya, as suggested by Italian authorities, because this would have been a violation of the international maritime law, which defines “delivery to a place of safety” as a part of the search and rescue obligations. On 2 July 2019, the Tajoura Detention Centre in Libya, which hosts migrants returned to that country, was bombed resulting in more than 40 people killed and 82 injured. This attack was condemned by the African Union-European Union-United Nations’ Task Force and the UN High Commissioner for Human Rights Michelle Bachelet, who repeated her concerns about the unsafe environment for migrants in the detention centres. This attack and the attacks on detention centres in the past show that the ports of Libya cannot be considered safe for migrants.

The judicial harassment against Carola Rackete and Sea Watch took place in the context of a campaign of delegitimisation, verbal attacks and violent threats against migrant rights defenders. When she disembarked the boat accompanied by the Italian authorities, a group of people started to threaten her and insult her with sexist comments, including threats of sexual assault. Moreover, the judge who ordered Rackete’s release was insulted and threatened.

The Italian Interior Minister Matteo Salvini called the decision of the Sea Watch captain “a criminal act, an act of war” and defined Rackete as “a criminal who should be put in jail”. Commenting on Carola Rackete’s arrest on his Twitter account, the Minister said: “Mission accomplished. Pirate ship seized, maximum fine for foreign NGO.” This high-level smear campaign does not only stigmatise the work of Carola Rackete and Sea Watch but also all migrant rights defenders in the country and fuels hatred towards them and their peaceful and legitimate work.

This is not the first time the Italian authorities have attempted to criminalise migrant rights defenders for their peaceful and legitimate work on protection of the right to life of migrants in distress at sea. In the past two years, investigations were opened against crew members of several NGOs involved in search and rescue operations, including Sea Watch, Proactiva Open Arms and Jugend Rettet.

On 2 August 2017, the Italian judiciary seized the rescue ship “Iuventa”, belonging to the German NGO “Jugend Rettet”, which had helped to save more than 14,000 people at sea, and opened an investigation against its crew, including its captain Pia Klemp. On 20 June 2018, the Trapani Public Prosecutor’s Office notified ten of its crew members of the ongoing investigations into “aiding and abetting illegal immigration to Italy”. A conviction would result in 5 to 20 years imprisonment and a fine of 15,000 euros per rescued person. Since the investigation procedures have not been completed, access to the file is denied. The questionings will continue during the course of 2019. Until then, the Iuventa ship will remain in the port of Trapani, in Sicily.

Concerns regarding the situation of migrant rights defenders in Italy and criminal investigations against NGO ships involved in search and rescue in the Mediterranean in particular were expressed by the EU Agency for Fundamental Rights and UN experts. 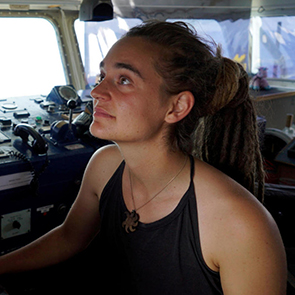