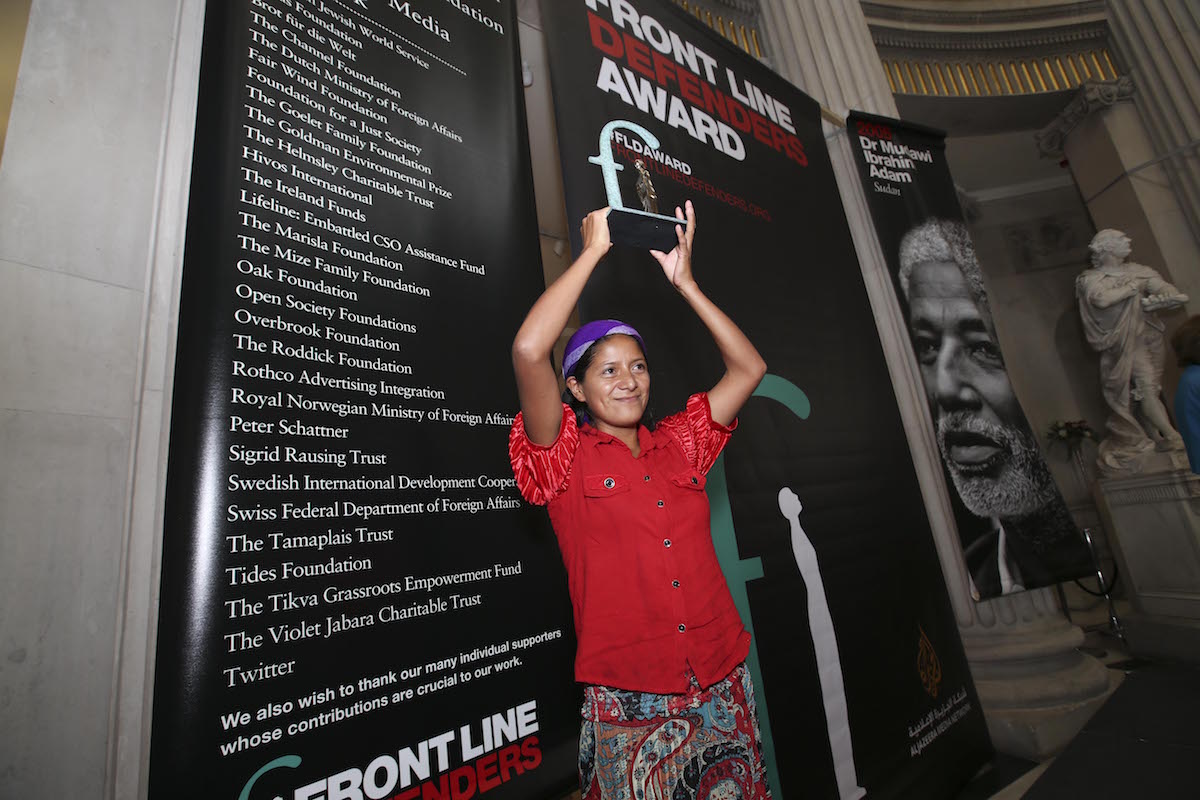 Dublin, Ireland: Ana Mirian Romero from Honduras received the 2016 Front Line Defenders Award for Human Rights Defenders at Risk, in recognition of the extreme threats she faces fighting for the land and rivers of her community.

Ana Mirian is a Lenca woman and a member of both Movimiento Indígena Lenca de La Paz Honduras, MILPAH, (Lenca Indigenous Movement of La Paz) and Consejo Indígena San Isidro Labrador (San Isidro Labrador Indigenous Council). She has fought for legal recognition of her community’s indigenous land, and against the installation of the Los Encinos hydro-electric dam which would destroy their livelihoods. As a result, she, her family and the other members of MILPAH are now targets of repeated attacks by police, military and armed civilians connected to the hydroelectric company. Her children were forced to leave school due to repeated harassment, and in early 2016 her home was burned to the ground.

This recognition is not for me, it's for all indigenous people in Honduras fighting against dams that destroy our land. This award will not make us complacent. We will continue our struggle for our rivers. We do not fear.
- Ana Mirian Romero

Despite the life-threatening risks to human rights defenders in Honduras, Ana has persevered. The Front Line Defenders award is recognition of the work that Ana and so many women like her undertake for the greater common good and I am honoured to confer the award on her here today.
- Mary Robinson

Mary Lawlor, Front Line Defenders Executive Director, introduced the organization and the significance of the award, while paying homage to the 6 finalists (see below).

This year, we were honoured to promote the incredible work of six human rights defenders around the world, who were selected as finalists for the award. Each demonstrates daily a commitment to their communities’ struggles that has been unbroken by arrests, harassments, and ongoing attempts to intimidate them.
- Mary Lawlor

Denis O'Brien, Chairman of the Board of Directors, welcomed the audience, including members of the diplomatic corps, Irish members of parliament and government officials to Dublin City Hall.

Human rights defenders from Azerbaijan, Burma/Myanmar, Colombia, Honduras, Palestine, and Tanzania were selected as finalists for the 2016 award.

Given annually, the Front Line Defenders Award for Human Rights Defenders at Risk honours the work of human rights defenders who courageously make an outstanding contribution to the promotion and protection of human rights of their communities, often at great personal risk.

Ms. Phyoe Phyoe Aung is student rights defender in Burma/Myanmar. She is the General Secretary of the All Burma Federation of Student Unions (ABFSU), and has led widespread protests for academic freedom across the country. She spent three years in prison for peacefully participating in the “Saffron Revolution” in 2008, and was again arrested in 2015 with more than 100 other students – many of whom were tortured. Phyoe Phyoe was released on presidential pardon just three weeks ago, in April 2016.

Mr. Mohammed Khatib is a human rights defender working on the right to self-determination in the Occupied Palestinian Territories. He is Palestinian lawyer and one of the founders of the Popular Struggle Coordination Committee (PSCC), which connects peaceful protests in different villages across Palestine. In his 11 years as a human rights defender, he has been targeted with harassment, detentions and abuse by the Israeli military, and physical assault by Israeli settlers. He has been one of the leaders of protests in his village of Bil'in, in the West Bank, which have been held every week since 2005, and which helped pressure the Israeli Supreme Court to order the re-routing of the Wall it has constructed around the village.

Ms. Ingrid Vergara Chavez is a land rights defender working with the Movement of Victims of State Crimes (MOVICE) in Sucre, Colombia. Ingrid and her colleagues demand justice and an end to impunity for government and paramilitary crimes, and advocate for the return of lands to displaced peasant and indigenous communities In response, she receives constant death threats. Four of her colleagues have been killed in the past two years, and she and her daughters have been threatened with weapons, public pamphlets, phone and email messages, and surveillance.

Mr. Khalid Bagirov is a representative finalist, the face of a group of threatened and persecuted human rights lawyers in Azerbaijan. When the Azeri government began an unprecedented crackdown on civil society in 2013, lawyers taking on the cases of prominent human rights defenders and journalists became targets of government persecution themselves. For his bold work defending some of the most prominent and targeted HRDs in the country, Bagirov was disbarred in 2015 – but has since continued to litigate and win cases before the European Court of Human Rights. He continues to advise the few remaining rights lawyers in the country, who are collectively honoured with this nomination.

Ms. Ana Mirian Romero is a land rights and indigenous rights defender in Honduras. She is a member of Movimiento Indígena Lenca de La Paz Honduras – MILPAH (Lenca Indigenous Movement of La Paz, Honduras) and the Consejo Indígena San Isidro Labrador (San Isidro Labrador Indigenous Council). She has been active in opposing the installation of the Los Encinos hydro-electric dam on indigenous land near the Chinacla river. In 2010 she filed a lawsuit for the recognition of the community's ancestral lands, and now she her family are targets of repeated attacks by police, military and armed civilians connected to the hydroelectric company. Her children were forced to leave school due to repeated harassment, and in early 2016 her home was burned to the ground, after she returned home from giving birth to her youngest son.