About Elena Urlaeva
Status:
Forced Psychiatric Treatment
About the situation

Elena Urlaeva, although released from the psychiatric hospital where she was being detained by a court order, is being forced to continue to take the drug Rispolept that is used to treat schizophrenia. 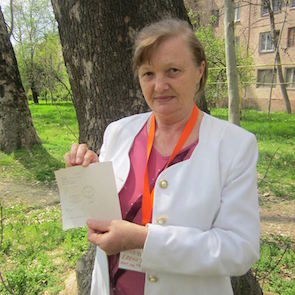 Elena Urlaeva, an Uzbek human rights defender, although released from the psychiatric hospital where she was being detained by a court order, is being forced to continue to take the drug Rispolept that is used to treat schizophrenia.

Front Line Defenders believes that the Uzbek authorities are attempting to silence and undermine the human rights work of Elena Urlaeva by using Brezhnev-era tactics of labeling dissidents insane and forcing unnecessary ‘treatment’ and long stays in psychiatric hospitals upon them.

Director of Front Line Defenders Mary Lawlor said: “This is yet another example of the relentless crackdown on the legitimate activities of human rights defenders and journalists by the Uzbek authorities since the Andijan massacre in May earlier this year.”

According to Human Rights Watch, on 27 August Ms Urlaeva, chairperson of the Organisation for the Defence of Rights and Freedoms of Citizens of Uzbekistan, was found in possession of four copies of a caricature of the leading figures of the Uzbek government and 75 pamphlets of the Ozod Dekhon (“Free Peasants”) unregistered political party. She was charged with “desecrating state symbols” and was placed in a psychiatric institution to be evaluated for her competency to stand trial.

The psychiatric commission pronounced her sane on September 23 in Tashkent City Psychiatric Hospital but reversed its decision seven days later, after the police had forcibly moved her to another psychiatric hospital.

She was diagnosed as schizophrenic by a criminal court on 18 October and ordered to be committed. Ms Urlaeva was released as an outpatient but is under court order to continue taking Rispolept. Side effects of the drug include insomnia, agitation, headaches and extrapyramidal disorders.

This is not the first time Ms Urlaeva has been forcibly administered psychotropic drugs or been arbitrarily detained in a psychiatric facility. In April 2001 she was incarcerated for two months after leading protests against a road-building project. In August of the following year she was held for three months after a protest outside the Ministry of Justice. On both occasions she was injected against her will with psychiatric drugs, including Thorazine and Cyclodol. In 2003, Ms Urlaeva was examined voluntarily by an independent psychiatric commission and was found to be sane.

In the former Soviet Union, especially during the Khrushchev-Brezhnev era, political opponents of the government often found themselves labelled a ‘schizophrenic’ or a ‘paranoid psychotic’ and detained for long periods in ‘special psychiatric hospitals.’