Threats to members of Citizens’ Association of Women For Peace

About Ljiljana Nešić
Status:
Threatened and hacked
About the situation

Since 7 July 2022, members of human rights organisation Zene za mir (Citizens’ Association of Women for Peace) have been facing a number of threats and cyber attacks. 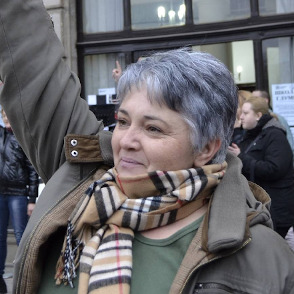 Ljiljana Nešić is a woman human rights defender and president of the human rights organisation Žene za mir – Women for peace. In 1994, the woman human rights defender founded the SOS telephone in Leskovac, Serbia. Since 2007, Ljiljana Nešić has been protecting women's human rights and peace activism in the fight against patriarchy, nationalism, militarism and fascism. She is a member of the Women Against Violence Network and the Resolution 1325 Network - Women, Peace and Security where she participated in the monitoring and implementation of the National Security Strategy in Serbia.

Since 7 July 2022, members of human rights organisation Zene za mir (Citizens’ Association of Women for Peace) have been facing a number of threats and cyber attacks.

The Citizens’ Association of Women for Peace is a human rights organisation founded in 2007 in Leskovac, Serbia. The human rights organisation runs a hotline for women and child victims of domestic violence and works with empowering women survivors. Their mission is to promote, educate and protect women’s rights, with a commitment to building peace and non-violence. Ljiljana Nešić is a woman human rights defender and the president of the of Citizen’s Association of Women for Peace, Marija Trajkovic is a woman human rights defender and Co-ordinator for the SOS hotline.

Since 7 July 2022, both Ljiljana Nešić and Marija Trajkovic have faced threats and cyber attacks. The threats are believed to be linked to the criticism expressed by Women for Peace towards a new hot line for victims of domestic violence inaugurated in Lescovac and operated by U–Tim mame i tate (U-team of Fathers and Mothers). On 7 July, Ljiljana Nešić wrote an open letter to the head of U-team of Fathers and Mothers, Miodrag Stanković, after he publicly labelled her organisation discriminatory as it provides support to women only. In her letter, Ljiljana Nešić wrote about almost 3 decades of experience in working with victims of domestic violence and welcomed other human rights initiatives in joining this important work but wondered whether the members of the new hotline team have received the adequate training. She also expressed her astonishment by the fact that the new SOS team is lead by Miodrag Stanković, a man who received two convictions for domestic violence in 2016, and that public funding was allocated to his project. After this information became public, Ljiljana Nešić received a call from an acquaintance who asked her to talk to Miodrag Stanković, that he was ready to personally apologize to her, so that the story would not spread any further. Ljiljana Nešić refused the meeting stating that Miodrag Stankovic should publicly apologise to all the victims of violence, and not just her. Marija Trajkovic began receiving threats regarding the loss of all funding, her job and that she would be sued if she asked questions regarding the accreditations and competencies of the U-team of Fathers and Mothers’ new Leskovac branch. On 11 July 2022, the human rights organisation’s email was hacked, and some emails addresses and bank statements were deleted.On 7 July 2022, at 3.00 pm, while passing the parking lot in Moše Pijade Street, an unknown individual shouted “Rockefeller whores” at Ljiljana Nešić and Marija Trajkovic. On 10 July 2022, at 3.10 pm, in Moše Pijade Street, an unknown man addressed Ljiljana Nešić with words of “I know you have a daughter”. On 12 July 2022, around 3.20 pm, an unknown man approached Marija Trajković stating “we will fuck you”. On 15 July 2022, at 3.10 pm at Moše Pijade street, an unknown man told Ljiljana Nešić, “I know you have grandchildren”. 10 minutes later in Radanska street, an unknown man approached Marija Trajković stating, “I know you live alone”. On 16 July 2022, in Moše Pijade Street at 2.20 pm, an unknown young man intercepted the woman human rights defenders and addressed Ljiljana Nešić with the words "You talk a lot". On 18 July 2022, at Radanska street, an unknown man threatened the woman human rights defenders - “you will never get finance again, we will shut you down”. On 21 July 2022, Ljiljana Nešić and Marija Trajkovic reported threats to the local police d epartment.

This is not the first time this organisation has faced harassment. On 24 May 2016 in Leskovac, the Citizens’ Association of Women for Peace organised a peace march to celebrate the International Day of Women’s Action for Peace and Disarmament with support of the Women in Black Network. During the peace march, a group of 10 men harassed, threatened and threw eggs at the activists – the police did not react. Despite several criminal charges filed against perpetrators, no one has been arrested to this date.