About David Ravelo Crespo
Status:
Threatened
About the situation

On 31 July 2017, several organisations and human rights defenders in Colombia reported a new wave of threats and intimidation from members of the paramilitary group Autodefensas Gaitanistas de Colombia (AGC). The group circulated a threatening pamphlet in the municipality of Barrancabermeja, Magdalena Medio, and its surroundings, including the name of several human rights organisations and five HRDs: Ivan Madero, David Ravelo, Sonia Nevado, Melkin Castrillon, and Maria Ravelo. 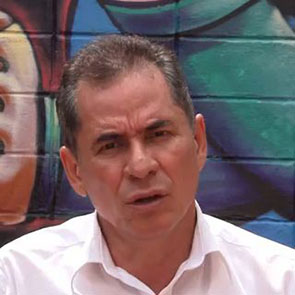 David Ravelo Crespo is the secretary of the Board of Directors of the Corporación Regional para la Defensa de los Derechos Humanos – CREDHOS (Regional Corporation for the Defence of Human Rights), a non-governmental organisation dedicated to the protection and promotion of human rights in Colombia.

Iván Madero Vergel is president of Corporación Regional para la Defensa de los Derechos Humanos– CREDHOS (Regional Corporation for the Protection of Human Rights), an organisation which provides training and education on human rights issues and International Humanitarian Law. David Ravelo Crespo is the secretary of the Board of Directors of the CREDHOS. On 20 June 2017, the human rights defender was released on parole after almost 7 years in prison. He had been detained since the 14 September 2010, when he was falsely accused of an aggravated homicide committed in 1991. He was sentenced to 18 years in prison. Sonia María Nevado Morales is member of Frente Amplio por la Paz (Broad Front for Peace) and has had an active role in the peace process in Barrancabermeja. Melkin Hernán Castrillón Peña is a campesino leader, Coordinator of the National Secretariat for Human Rights of Juventud Rebelde (Rebellious Youth) and Treasurer of the Asociación Campesina del Valle del Río Cimitarra (Peasant Farmer Association of the Cimitarra River Valley's, ACVC). Maria Leonilda Ravelo Grimaldo is the president of Asociación Nacional de Ayuda Solidaria – ANDAS (National Association for Solidarity Aid) in Barracabermeja. The human rights defender is also member of the Peace Commission in Colombia.

On 31 July 2017, several organisations and human rights defenders in Colombia reported that AGC was circulating a pamphlet in the region of Barrancabermeja and its surroundings containing death threats against several defenders working on human rights issues and the peace process in the country. In the threatening message, the paramilitary group accused them of colluding with the government and Fuerzas Armadas Revolucionarias de Colombia (Revolutionary Armed Forces of Colombia, FARC) rebels against the interests of the Colombian people. AGC stated that they would bring them back “en bolsas plasticas picaditos” (chopped up in plastic bags). The pamphlet named CREDHOS, Asociación de Víctimas de Crímenes del Estado – Magdalena Medio (ASORVIMM), ANDAS, ACVC, Juventud Rebelde, among others. The paramilitary group also stated that the following human rights defenders are targets of high military value: Ivan Madero, David Ravelo, Sonia Nevado, Melkin Castrillon, and Maria Ravelo. ACG also stated that: “para su conocimiento no es una amenaza, es una declaracion de guerra, ya estamos en la zona. Ustedes y sus familias lo saben” (“for your knowledge this is not a threat, it is a declaration of war, we are already in the area. You and your family know that”).

On the morning of 30 July 2017, while Maria Leonilda Ravelo Grimaldo and her daughter were participating in a workshop in Comuna 1 of Barracabermeja, several unidentified persons on motorcycles appeared to be monitoring the area and took photos of the human rights defender. Around midday, one of the bikers approached a member of the community and said that the human rights defender should leave the area immediately and never come back. Maria Leonilda Ravelo Grimaldo and her daughter decided to leave the workshop.

On 28 July 2017, around 10am, Iván Madero Vergel received a call on his cellphone from an unidentified person threatening that if the human rights defender did not stop denouncing human rights violations he would be killed.

This is not the first time that Front Line Defenders has reported on this pattern of threats and intimidation from AGC in the Magdalena Medio region. On 26 November 2016, another pamphlet signed by the paramilitary group promised a financial reward for the killing of Iván Madero Vergel, Lilia Peña Silva, Melkin Hernán Castrillón Peña, Miguel Cifuentes, and Eladio Morales.

On 25 July 2016, an additional pamphlet signed by the AGC was circulated on social media, threatening to kill several human rights defenders, trade unionists and public officials who supported the peace process. The pamphlet was shared directly on the CREDHOS Facebook page and the personal account of one of its members, Andrés Ortiz. The pamphlet was also sent directly to the human rights defender María Ravelo Crespo.

According to a report from the Colombian Ombudsman Office, 156 social leaders and human rights defenders have been killed between January 2016 and March 2017. In addition, 5 disappearances, 33 attacks and over 500 threats were reported. According to the Ombudsman, Carlos Alfonso Negret Mosquera: “one of the main causes of this phenomenon is the attempt by illegal armed groups to occupy the territory from which the FARC have withdrawn”.

The Colombian government signed a peace deal with FARC rebels in November 2016, but this has not made the country safer for human rights defenders. Despite all evidence to the contrary, the government continues to maintain the position that these killings are neither systematic nor linked to paramilitary activity.

Front Line Defenders is gravely concerned at the most recent death threats against several human rights defenders and organisations in Colombia, since it believes that these threats are directly related to their human rights activities.

1. Carry out an immediate, thorough and impartial investigation into the death threats against Iván Madero Vergel, David Ravelo Crespo, Sonia María Nevado Morales, Melkin Hernán Castrillón Peña, and members of several human rights organisations, with a view to publishing the results and bringing those responsible to justice in accordance with international standards;

3. Guarantee in all circumstances that all human rights defenders in Colombia are able to carry out their legitimate human rights activities without fear of reprisals and free of all restrictions;