About Ana Patricia Martínez
Status:
Detained & Released
About the situation

As land, environmental and indigenous rights defenders from all over the country make their way to Managua for the 5th National Peaceful Protest against the Construction of the Inter-Oceanic Canal, reports of violent repression to prevent civil society from participating have emerged. 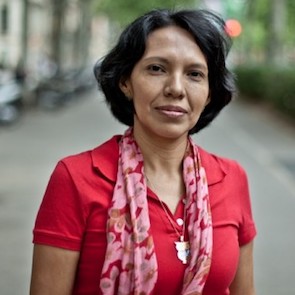 As land, environmental and indigenous rights defenders from all over the country make their way to Managua for the 5th National Peaceful Protest against the Construction of the Inter-Oceanic Canal, reports of violent repression to prevent civil society from participating have emerged.

Civil society organisations report extensive deployments of police and anti-riot units in various areas of the country since 27 November. In El Tule, Nueva Guinea and the Southern Atlantic Autonomous Region (RAAS), where many small farmers and indigenous communities are threatened with forced eviction as a result of the construction of the canal, human rights defenders have reported the use of tear gas and rubber and lead bullets by police against protesters. Defenders have also reported that truck drivers who transport demonstrators to the capital for the mobilisation are being harassed. In addition, defenders and social leaders travelling via public transport are being searched and harassed by authorities.

On 30 November 2016, in Nueva Segovia, human rights defender Ana Patricia Martínez, Director of the Fundación para la Promoción y Desarrollo de las Mujeres y la Niñez - FUNDEMUNI (Foundation for the Promotion and Development of Women and Children "Blanca Araúz"), was detained for three hours by the police. The authorities also seized her vehicle, which belonged to the organisation. Martínez was making her way back from a rural community where she was conducting a workshop with women survivors of gender-based violence. When asked about the reason why she was being detained, police replied that it was because she was helping to transport people so they could participate in the march ("andaban jalando gente para la marcha"). On the same day, the truck of land rights defender Francisca Ramírez, General Coordinator of the Council for the Earth, the Lake and Sovereignty, was reportedly destroyed by police.

During the last national mobilisation against the construction of the canal, on 27 October 2016, police blocked access to the meeting points where human rights defenders, social leaders, small farmers and indigenous communities had agreed to meet in Managua. Demonstrators were violently repressed by police on several occasions. For example, in the vicinity of the airport, groups making their way to meeting points were attacked with tear gas by riot police who also fired shots in the air.

The mobilisation of civil society against the canal project and the results of the general election coincide with the visit of the Secretary General of the Organization of American States (OAS), Mr Luis Almagro. Mr Almagro's visit is the result of an agreement between the OAS and the Government of Nicaragua to hold a high level dialogue on the situation of democracy in Nicaragua and, in particular, the general elections held on 6 November of this year, which gave the incumbent President a third term in office. The Secretary General is meeting today with representatives of the private sector and is due to meet with President Daniel Ortega tomorrow, on 1 December 2016.

Front Line Defenders is concerned about the use of violence against and targeting of human rights defenders and protesters and calls upon the Government of Nicaragua to uphold its obligations to fully respect and allow the exercise of the right to freedom of peaceful assembly and expression. Front Line Defenders also calls upon the authorities to investigate instances of harassment, intimidation and arbitrary detention of human rights defenders and protesters wishing to join the demonstration.