On 28 March 2018, the head of Human Rights Center Memorial in Makhachkala, Republic of Dagestan (located in the North Caucasus), Sirazhutdin Datsiyev, was attacked by an unidentified person. 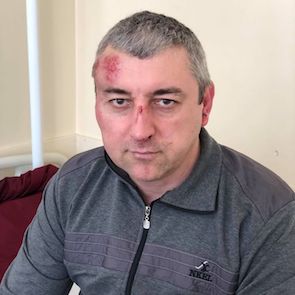 The European Union's OSCE Permanent Council has released a statement on the recent violence against human rights defenders in the Russian Federation.

"The European Union remains deeply concerned by violations of rights of human rights defenders in the Russian Federation, in particular a series of attacks and assaults against the non-governmental  organisation, Memorial, and its representatives. On 18 January, 1 February and 15 March we raised our concerns over the arrest of Mr Oyub Titiev, Head of the office of Memorial in Chechnya, and the arson attacks on Memorial’s office in Ingushetia and Titiev’s lawyer’s car in Dagestan, as well as threats made to a representative of Memorial’s office in January. We now have to add to this list the attack on Mr Sirajutdin Datsiev, Head of Memorial’s office in Dagestan, on 28 March."

On 28 March 2018, the head of Human Rights Center Memorial in Makhachkala, Republic of Dagestan (located in the North Caucasus), Sirazhutdin Datsiyev, was attacked by an unidentified person.

On the morning of 28 March 2018, an unidentified person attacked Sirazhutdin Datsiyev, as he was leaving his house on Z. Arukhova Street in Makhachkala to go to work. Not far from his house he noticed a "Lada Priora" car with dark tinted windows. He heard footsteps approaching from behind, and was hit on the head, causing him to fall to the ground. Although he did not lose consciousness, he could not turn his head to identify the attacker.

A witness to the incident later informed Sirazhutdin Datsiyev that a man wearing sunglasses had jumped out of the car and hit him on the head, before running back to the car and leaving.

Sirazhutdin Datsiyev managed to return home unaided. An ambulance arrived and took him to the neurosurgical department of the Republican Clinical Hospital (Central Hospital). The police have begun investigating the incident and a criminal case will be opened once the severity of the injuries have been determined. Doctors have so far defined his injuries as moderate.

This incident is the latest of a series of violent and intimidating acts against employees of Human Rights Center Memorial across Russia.

In Makhachkala on 22 January, a car that Human Rights Center Memorial’s lawyer was using to travel to Chechnya, was set on fire.

On 17 January in Nazran, the office of Human Rights Center Memorial was set on fire.

On 9 January 2018, Oyub Titiev, head of Human Rights Center Memorial’s Chechen office of was arrested in Grozny on the trumped up charge of large scale drug possession under section 2 of Article 228 of the Criminal Code of the Russian Federation.

Front Line Defenders condemns the attack against Sirazhutdin Datsiyev and believes the attack to be directly connected to his work in the protection and promotion of human rights in the Republic of Dagestan.

1. Carry out an immediate, thorough and impartial investigation into the attack on Sirazhutdin Datsiyev  with a view to publishing the results and bringing those responsible to justice in accordance with international standards;

2. Take all necessary measures to guarantee the physical and psychological integrity and security of Sirazhutdin Datsiyev;