About Sam Rajabi
Status:
Incommunicado detention
About the situation

On 18 February 2020, the Appeals Court in Tehran upheld the prison sentence against human rights defender Sam Rajabi. He had been found guilty of ‘espionage’ and ‘cooperation with a hostile state’, and sentenced to 6 years' imprisonment by the Revolutionary Court in Tehran on 23 November 2019. 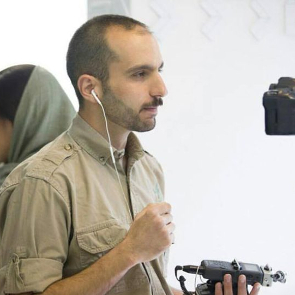 On 18 February 2020, the Appeals Court in Tehran upheld the prison sentence against human rights defender Sam Rajabi. He had been found guilty of ‘espionage’ and ‘cooperation with a hostile state’, and sentenced to 6 years' imprisonment by the Revolutionary Court in Tehran on 23 November 2019.

Both court sessions were closed to the public and the defender’s family was not allowed to attend. The judge banned the defender’s lawyer from speaking during the presentation of the indictment.

The human rights defender was arrested in January 2018. Following his arrest, he was subjected to prolonged incommunicado detention. He remains detained in Evin Prison, where he is frequently put in solitary confinement.

On the evening of 25 January 2018, Sam Rajabi’s house was raided by security forces and he was illegally detained. It remains unclear why security forces confiscated a personal computer, documents, and books belonging to his deceased father, who was a well-known scholar of Iranian studies. Six other members of PWHF were illegally arrested on the same day.

On 26 March 2018, his mother, Lili Houshmand Afshar, was allowed her only visit to date with her son since his detention. Sam Rajabi is being denied legal counsel and has been  unlawfully kept in solitary confinement since his mother’s last visit.

Lili Houshmand Afshar had been told by prison authorities that she would be allowed to visit her son on 14 April 2018, but she was denied the visit on arrival at the prison.

Over the past few months, Iranian authorities have intensified the unlawful detention of environmentalists and human rights defenders in Iran, including Niloufar Bayani, Sepideh Kashani, Taher Ghadirian, Houman Jowkar, and Amir-Hossein Khaleghi, with vague allegations of espionage.

Front Line Defenders is deeply concerned about the welfare of Sam Rajabi and believes he has been targeted solely as a result of his legitimate activities in defence of environmental rights.

1. Immediately and unconditionally release Sam Rajabi, who Front Line Defenders believes is being held solely as a result of his legitimate and peaceful work in the defence of human rights;

2. Ensure that the treatment of Sam Rajabi, while in detention, adheres to the conditions set out in the ‘Body of Principles for the Protection of All Persons under Any Form of Detention or Imprisonment', adopted by UN General Assembly resolution 43/173 of 9 December 1988;

3. Allow Sam Rajabi immediate and unfettered access to his families and legal counsel;

4. Return the documents confiscated during the raid, as they are not linked to any criminal activity;

5. Guarantee in all circumstances that all human rights defenders in Iran are able to carry out their legitimate human rights activities without fear of reprisals and free of all restrictions, including deprivation of liberty and judicial harassment.