About Ricardo Baltodano
Status:
Released in Amnesty
About the Situation

Ricardo Baltodano was arbitrarily detained in the afternoon of 15 September by the Nicaraguan police in Managua. According to the information available, no arrest warrant was issued by the judicial authority and he is currently held incommunicado. 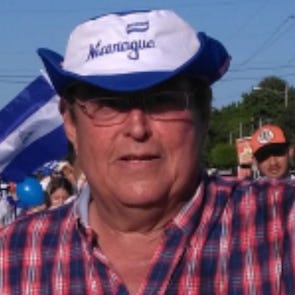 Ricardo Baltodano is a Nicaraguan human rights defender, academic and trade union activist. He is currently the General Secretary of the Trade Union of Teachers from UPOLI University (Sindicato de Docentes de la Universidad Politécnica de Nicaragua). He has been actively involved in the Social Movements and Civil Society Articulation (Articulación de Movimientos Sociales y Sociedad Civil), a group consisting of activists and civil society organisations, which emerged in response to the political crisis that erupted in April this year. Ricardo Baltodano and members of his family have a pending request for precautionary measures before the Inter-American Commission on Human Rights due to recent threats and harassment. In June of this year, shots were fired at his house.

The human rights defenders were arbitrarily held in pretrial detention after participating in a wave of political manifestations against human rights violations by the government that began on 18 April 2018, and developed into a national political crisis. The protests were met with a disproportionate repression by government security forces, which left 325 killed and 2,000 wounded. They became political prisoners and were held in maximum security cells, where they faced torture and ill treatment by the police.

On 11 June 2019, 56 of these political prisoners, including a number of human rights defenders, were released from Nicaraguan prisons under the application of an amnesty law that was approved on 8 June 2019, in an expedited legal process that took 24 hours. The main outcome of the law is to remove the responsibility of “all the individuals who participated in the events that took place in the whole national territory from 18 April 2018 until the present date”, including state agents who are accused of human rights violations and international crimes, such as crimes against humanity. Up to this moment, 86 individuals remain arbitrarily detained, and are expected to be released in the upcoming weeks under the same law.

According to the amnesty law, the criminalisation processes that started against 760 human rights defenders and activists for their involvement in manifestations were suspended. Nonetheless, article 3 of the legal text’s non-repetition provisions area clear threat to human rights defenders and activists, as any activity that might be interpreted as political protest will resume their criminalisation processes, including any new charges. The threats against defenders contained in article 3 were supported by the president of the Parliament, who publicly praised the existence of this article as a ‘warning’ for anyone who would seek to exercise their freedom of expression or assembly in public demonstrations.

As part of the International Observatory of the Human Rights Situation in Nicaragua, Front Line Defenders has denounced the violent repression against human rights defenders in Nicaragua. It stressed that more than a year after the beginning of the crisis, the situation of the remaining political prisoners has seriously worsened while in detention due to deficient medical attention, violence, acts of torture and the lack of dignified conditions.

Front Line Defenders welcomes the decision to release the 56 activists and human rights defenders, while remaining concerned about the issuing and application of a general amnesty law that encompasses state agents who have been denounced as responsible for human rights violations, even crimes against humanity. Front Line Defenders stresses the need for Nicaraguan authorities to unconditionally free and drop all cases against human rights defenders in the country, to grant them full reparation over the violations they suffered, and to pursue justice for those responsible. Moreover, Front Line Defenders condemns the application of a blanket amnesty on behalf of state agents who might have committed gross human rights violations and international crimes.

Ricardo Baltodano was arbitrarily detained in the afternoon of 15 September by the Nicaraguan police in Managua. According to the information available, no arrest warrant was issued by the judicial authority and he is currently held incommunicado.

The human rights defender had just returned from a protest against the Nicaraguan government, when approximately 30 national police officers arrived at his house in the neighbourhood of San Antonio to arrest him. He first managed to escape but was later detained at a neighbour’s house.

His detention comes in a context of criminalisation of human rights defenders in the country, particularly those active in protests since the crisis began. In the afternoon of 10 September, woman human rights defender, Amaya Eva Coppens, was arbitrarily detained by government paramilitary forces in the city of Leon. She is currently being held in incommunicado detention along with other Nicaraguan student leaders and activists: Edwin Carcache Dávila, Yubrank Suazo, Byron Estrada, Luis Quiroz, Nahiroby Olivas, Juan Pablo Alvarado, Levis Rugama, Yaritza Mairena and Victoria Obando. Several of them have been subject to harassment and threats prior to their arrest.

Front Line Defenders is deeply concerned about the arbitrary detention of Ricardo Baltodano and other student leaders and activists. It furthermore condemns the pattern of harassment and threats followed by arbitrary detention, targeting those who are outspoken and active about the context of human rights violations and repression in Nicaragua.

1. Immediately and unconditionally release Ricardo Baltodano and other human rights defenders and student leaders that remain in detention and drop all charges against them;

2. Take all necessary measures to guarantee Ricardo Baltodano’s physical and psychological security and integrity, as well as that of his family and other human rights defenders and student leaders that remain in detention;

4. Guarantee in all circumstances that human rights defenders in Nicaragua are able to carry out their legitimate human rights activities without fear of reprisals and free of all restrictions including judicial harassment.