About Raheleh Ahmadi
Status:
Imprisoned
About the situation

On 20 November 2021, the woman human rights defender, Raheleh Ahmadi was brought before Shahid Moqadas Amniat (Evin) Court, Branch I, for a hearing on a new charge. 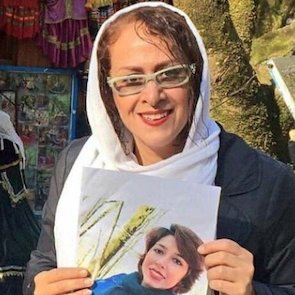 Raheleh Ahmadi, is a women’s rights defender who campaigns against mandatory veiling in Iran. Raheleh Ahmadi is also the mother of human rights defender Saba Kord Afshari, who is serving a 15 year sentence for “promoting corruption and prostitution through appearing without a headscarf in public”. In an attempt to further harass Saba Kord Afshari while in prison, the 26 Branch of Tehran Revolutionary Court sentenced Raheleh Ahmadi to 31 months in prison on 16 December 2019. Raheleh Ahmadi is currently serving her sentence in Evin prison, and had been alongside her daughter until they were separated on 9 December 2020 when Saba was transferred to Qarchak prison.

On 16 December 2019, Raheleh Ahmadi was sentenced to 31 months in prison by the Branch 26 of Tehran Revolutionary Court after being arrested from July 10 to 14 December 2019. The woman human rights defender has been judicially harassed for advocating for her daughter Saba Kard Afshari, as well as for campaigning against the mandatory veil in Iran.

On 9 December 2020, Raheleh Ahmadi suffered a nervous breakdown and as a result, lost movement in her left leg. Following examination, the doctor in Evin prison examined her and requested she be referred to hospital to undergo an electromyography (EMG). Her request for medical leave remained unanswered until 14 March.

On 9 December 2020, woman rights defender Raheleh Ahmadi had a nervous breakdown and as a result has lost movement in her left leg. The doctor in Evin prison examined her and requested she be referred to hospital to undergo an electromyography (EMG). To date, the Raheleh Ahmadi has not been transferred to a hospital and is reliant on a walking frame.

In early December, Saba Kord Afshari, Raheleh Ahmadi’s daughter, was transferred to Qarchak prison. Raheleh requested that she be transferred with her daughter however her request was refused by the prison officials.

On 1 June 2020, the lawyer of Saba Kord Afshari was informed that the verdict of the appeals court had been changed and that the woman human rights defender had now received a 15-year prison sentence. Previously, an acquittal had been issued in writing on March 17 2020 by the Evin Prosecutor’s Office. She had faced the charge of “promoting corruption and prostitution through appearing without a headscarf in public”. Her lawyer has expressed concerns regarding the acquittal, which was communicated to her in prison, emphasizing the unlawful proceedings in her case. Kord Afshari, who is currently serving a nine-year sentence, can face up to 24 years of imprisonment in total.

Saba Kord Afshari is a young (22 year old) women’s rights defender, who has been campaigning against the mandatory veil in Iran. She took part in the White Wednesdays- My Stealthy Freedom campaign which encourages women to appear in public without headscarf and post their photos/videos on social media to raise awareness in opposition to forced veiling laws. In reaction to the growing number of women peacefully joining this campaign, Iranian police warned on 23 February 2018 that those joining this campaign will be facing charges on “inciting and facilitating corruption and prostitution” which carries a maximum sentence of 10 years of prison.

Despite the maximum of 10 years imprisonment foreseen in Islamic Penal Code, on August 27, 2019, Saba Kord Afshari was initially sentenced to a total of 24 years in prison, following a trial that took place on August 19, 2019. Branch 26 of the Islamic Revolution Court of Tehran sentenced Saba to 15 years in prison for “encouraging people to commit immorality and/or prostitution” seven years and six months for “gathering and collusion against internal or external security” and one year and six months for “spreading propaganda against the system”. She was also sentenced to a ban on social activities. The court issued the maximum sentence stipulated by the Islamic Penal Code for each charge and increased it by half, based on the multiplicity of charges against her and Kord Afshari’s previous conviction in 2018.

Saba Kord Afshari was arrested for the first time on August 2, 2018, alongside many others, during a series of protests that occurred July-August 2018 against the deterioration of Iran’s economy as well as the corruption within government. She was first transferred to Qarchak Prison in Varamin and later, in October 2018, to Evin prison’s women’s ward. In August 2018, she was sentenced to one year in prison on the charge of “disrupting the public order” at Branch 28 of Tehran’s Revolutionary Court. She was released along with a large number of prisoners on 14 February 2019 as a part of general pardon coinciding with the 40th anniversary of the Islamic Revolution.

Saba Kord-Afshari was rearrested on June 1, 2019 in her house and the following day, she was charged with “encouraging people to commit immorality and/or prostitution” for removing her hijab and walking without hijab, as well as the two other charges. On June 11, 2019, she was sent to Qarchak prison near Tehran. She was denied contact with a lawyer and pressured by the authorities to incriminate herself in a televised appearance. Saba was eventually transferred to the women’s ward of Evin on August 13, 2019. The authorities detained her mother, Raheleh Ahmadi, from July 10 to 14, 2019 to harass Kard Afshari further, and the 26 Branch of Tehran Revolutionary Court sentenced Raheleh to 31 months in prison on 16 December 2019. Raheleh is currently serving her sentence in Evin prison alongside her daughter. Neither Saba, nor her mother have been granted temporary release during the COVID19 outbreak.