About Meltem Aslan
Status:
Released & Travel Ban
About the situation

On 17 November, 2018, all but one of those detained, Yiğit Aksakoğlu, were released from police custody and issued a travel ban. Yiğit Aksakoğlu is being held on allegations of supporting mass protests in 2013.

On 16 November 2018, around 6 AM, 13 human rights defenders including academics and prominent civil society actors were taken into custody in simultaneous police operations in İstanbul, Adana, Antalya and Muğla. 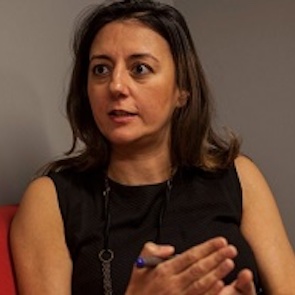 Meltem Aslan is a human rights defender focusing on reconciliation and justice, enforcing dialogue through art and culture. She is the former Director General of Anadolu Kültür. She is also a founding member of the Truth Justice Memory Center and the Co-Director of the Center. Previously, she has worked at Kadın Yurttaş Ağı Derneği (Female Citizens’ Network) and Turkish Economic and Social Studies Foundation on women’s rights issues and enhancing local governmental authorities.

In the early morning of 16 November 2018, police carried out simultaneous raids at various addresses in İstanbul, Adana, Antalya and Muğla. So far, 13 human rights defenders, including academics and prominent civil society actors, have been taken into custody while the arrest warrant was issued against 20 people. The human rights defenders have been held at Vatan Police Department to be questioned by the prosecutor. Çiğdem Mater is the only one who has been held in Kaş Police Department and will be transferred to İstanbul later on 16 November. Following their questioning, they may be released or referred to the court after the weekend.

According to the information note issued by the police department, the human rights defenders were detained as part of an investigation into prominent philanthropist Osman Kavala and the civil society organisations affiliated with him, namely Anadolu Kültür and Açık Toplum Vakfı. He was accused of “attempting to overthrow the government by force by supporting the Gezi Park Protests in 2013 to spread chaos and disorder at the national level”. In the information note, it was alleged that the human rights defenders, in coordination with Osman Kavala, had organised meetings to promote and generalise the Gezi Park Protests, brought professional protestors, trainers and facilitators from abroad to focus on issues like civil disobedience and peaceful protesting in order to keep the Gezi Park Protests ongoing, participated in the creation of new media sources in order to influence the public opinion about the existing and future protests, and met with Western organisations and individuals to ban the sale of tear gas to Turkey.

Front Line Defenders expresses its concern at the detention of 13 human rights defenders and the ongoing criminal investigation against them as it believes that they are solely linked to their legitimate and peaceful work in defence of human rights.