About Irlanda Jerez
Status:
Released in Amnesty
About the situation

On 26 October 2018, between 20 and 25 hooded men broke into the cell of Irlanda Jerez in “La Esperanza” prison in Tipitapa, Nicaragua, where she is currently held alongside woman human rights defender Amaya Eva Coppens and 17 other women political prisoners. The beatings began after Irlanda Jerez refused to be taken for an interrogation with unidentified armed men. Other cellmates imprisoned for political reasons were also injured. None of them received medical attention. 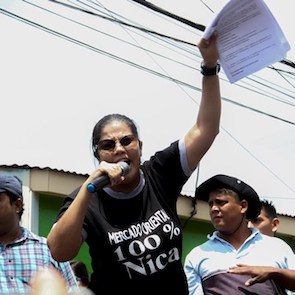 Irlanda Jerez is a dentist, small business owner and human rights defender in Nicaragua. She was detained by the police on 18 July 2018 following the “civil disobedience” campaign she lead at the “Mercado Oriental” (Eastern Market), the largest trade market in the country. At the beginning of July 2018, merchants and traders had stopped paying taxes in protest of the human rights abuses and repressive policies of Daniel Ortega’s government.

The human rights defenders were arbitrarily held in pretrial detention after participating in a wave of political manifestations against human rights violations by the government that began on 18 April 2018, and developed into a national political crisis. The protests were met with a disproportionate repression by government security forces, which left 325 killed and 2,000 wounded. They became political prisoners and were held in maximum security cells, where they faced torture and ill treatment by the police.

On 11 June 2019, 56 of these political prisoners, including a number of human rights defenders, were released from Nicaraguan prisons under the application of an amnesty law that was approved on 8 June 2019, in an expedited legal process that took 24 hours. The main outcome of the law is to remove the responsibility of “all the individuals who participated in the events that took place in the whole national territory from 18 April 2018 until the present date”, including state agents who are accused of human rights violations and international crimes, such as crimes against humanity. Up to this moment, 86 individuals remain arbitrarily detained, and are expected to be released in the upcoming weeks under the same law.

According to the amnesty law, the criminalisation processes that started against 760 human rights defenders and activists for their involvement in manifestations were suspended. Nonetheless, article 3 of the legal text’s non-repetition provisions area clear threat to human rights defenders and activists, as any activity that might be interpreted as political protest will resume their criminalisation processes, including any new charges. The threats against defenders contained in article 3 were supported by the president of the Parliament, who publicly praised the existence of this article as a ‘warning’ for anyone who would seek to exercise their freedom of expression or assembly in public demonstrations.

As part of the International Observatory of the Human Rights Situation in Nicaragua, Front Line Defenders has denounced the violent repression against human rights defenders in Nicaragua. It stressed that more than a year after the beginning of the crisis, the situation of the remaining political prisoners has seriously worsened while in detention due to deficient medical attention, violence, acts of torture and the lack of dignified conditions.

Front Line Defenders welcomes the decision to release the 56 activists and human rights defenders, while remaining concerned about the issuing and application of a general amnesty law that encompasses state agents who have been denounced as responsible for human rights violations, even crimes against humanity. Front Line Defenders stresses the need for Nicaraguan authorities to unconditionally free and drop all cases against human rights defenders in the country, to grant them full reparation over the violations they suffered, and to pursue justice for those responsible. Moreover, Front Line Defenders condemns the application of a blanket amnesty on behalf of state agents who might have committed gross human rights violations and international crimes.

On 26 October 2018, between 20 and 25 hooded men broke into the cell of Irlanda Jerez in “La Esperanza” prison in Tipitapa, Nicaragua, where she is currently held alongside woman human rights defender Amaya Eva Coppens and 17 other women political prisoners. The beatings began after Irlanda Jerez refused to be taken for an interrogation with unidentified armed men. Other cellmates imprisoned for political reasons were also injured. None of them received medical attention.

On 19 July 2018, only one day after she was detained, the Supreme Court communicated in a press release that the human rights defender had been convicted of "fraud” in a civil case from 2016. Initially acquitted, she was found guilty in an appeal and sentenced to five years in prison. Irlanda Jerez was taken to “La Esperanza” women’s prison, where she continues to perform civic resistance acts and gives speeches defending the rights of political prisoners.

On 26 October 2018, around 6 p.m., several disguised armed men dressed in black attacked Irlanda Jerez and other cellmates. The attack appears to be motivated by Irlanda Jerez’s refusal, supported by the other prisoners, to follow four of the unidentified men for an interrogation two hours earlier. The defender accepted to leave due to the severe injuries that she and her other cellmates had suffered – mainly on their mouths, ribs, arms and shoulders, one cellmate was left unconscious for three hours. No medical attention was provided to the injured women.

After the assault, Irlanda Jerez was taken to an office, where she had a gun pointed at her. The assailants declared that they were not police officials and that they would not kill her. In the meantime, the assailants told other prison inmates that Irlanda Jerez had 21 infractions to prison rules, including political statements she made against the government inside the prison facility.

The assailants planned on transferring Irlanda Jerez to an isolation cell in the male prison “La modelo”. However, after other inmates in “La Esperanza” protested for her return, Irlanda Jerez was returned to her prison cell.

Irlanda Jerez reported that she is afraid of being disappeared. Her husband Daniel Esquivel was able to visit her on 30 October 2018, and reported that she had bruises on several parts of her body. Not all family members were allowed to visit the injured inmates.

On 30 October 2018, members of the Special Monitoring Mechanism for Nicaragua (MESENI), established by the Inter-American Commission on Human Rights (IACHR), accompanied by the Permanent Human Rights Commission (Comisión Permanente de Derechos Humanos), presented themselves to the female prison facility “La Esperanza” to obtain information on the state of health and physical integrity of the attacked prisoners. After several requests, their entrance was denied by the prison authorities.

Front Line Defenders is deeply concerned about the recent attack on Irlanda Jerez in “La Esperanza” prison, as it is believed that it is solely motivated by Irlanda Jerez’s legitimate and peaceful work in defence of the right to freedom of expression in Nicaragua, and is extremely concerned over the possibility of reprisals. Front Line Defenders urges the authorities of Nicaragua to immediately and unconditionally release the human rights defenders arrested for political reasons and drop all charges against them.

1. Immediately and unconditionally release Irlanda Jerez, and quash the sentence against her;

2. Ensure that the treatment of the women human rights defenders, while in detention, adheres to the conditions set out in the ‘Body of Principles for the Protection of All Persons under Any Form of Detention or Imprisonment', adopted by UN General Assembly resolution 43/173 of 9 December 1988;

3. Take all necessary measures, in consultation with Irlanda Jerez and the other women political prisoners who were attacked, to restore and guarantee their physical and psychological integrity and security;

4. Guarantee in all circumstances that human rights defenders in Nicaragua are able to carry out their legitimate human rights activities without fear of reprisals and free of all restrictions including judicial harassment.