About CREDHOS
Status:
Threatened
About the situation

On the evening of the 25 July 2016, the paramilitary group Autodefensas Gaitanistas de Colombia (AGC) circulated a pamphlet on social media in which they stated their opposition to the peace process and issued death threats to human rights defenders, union leaders and public officials who support it; threatening messages containing the pamphlet were individually sent to the organisation Corporación Regional para la Defensa de los Derechos Humanos (Regional Corporation for the Defence of Human Rights, CREDHOS) and one of its members. 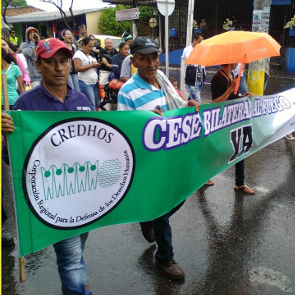 CREDHOS is an organisation dedicated to denouncing human rights violations and violations of international humanitarian law committed by paramilitary groups and members of the security forces, as well as accompanying victims and survivors of violence in the region of Magdalena Medio. CREDHOS has spoken out against the influence of paramilitary groups and the various acts of intimidation and harassment targeting members of the Corporation. As a result of their legitimate human rights work on behalf of victims and survivors, several members of CREDHOS have been intimidated, attacked, threatened with death, judicially harassed, unfairly imprisoned on unfounded charges and even killed.

For 30 years, members of the Colombian human rights organisation CREDHOS have been the target of killings and attempted assassinations, and have been subjected to verbal and physical attacks, judicial harassment, intimidation, and death threats. In most of these cases, no one has been held accountable for these crimes.

However, in a remarkable step towards justice, on 7 December 2016 the Unit for Attention and Integral Reparation of Victims officially announced that CREDHOS will be subject to collective reparation, recognising that its staff members were deliberately targeted because of their human rights work. This means that the members of the organisation could be entitled to measures such as restitution, damages, compensation, rehabilitation, satisfaction, and guarantees of non-repetition, as enshrined in law 1448 of 2011.

We are pleased by this decision and we are hopeful. All human rights defenders organisations should be entitled to integral reparation (...), because it is a way to recognise their work and to acknowledge that they help strenghten democracy and the rule of law. CREDHOS deserves this recognition after having worked for 30 years together with communities in the Magdalena Medio region.

CREDHOS is an non-governmental organisation founded in 1987 and is dedicated to denouncing human rights violations and violations of international humanitarian law committed by paramilitary groups and members of the security forces in Colombia. CREDHOS is also focused on accompanying survivors of violence in the region of Magdalena Medio. In retaliation to of their legitimate human rights work, several members of CREDHOS have been relentlessly persecuted and threatened.

David Ravelo Crespo, secretary of the Board of Directors of CREDHOS, has been in prison since September 2010. On 7 December 2012, he was sentenced to 18 years and 3 months' imprisonment, on false charges of plotting the murder of a Colombian public official in 1991. The judicial process against David Ravelo Crespowas plagued with irregularities, as the accusation against him was based on the testimony of incarcerated paramilitaries, one of which is currently being prosecuted for giving a false testimony.

To date in 2016, no less than 80 human rights defenders and social leaders have been killed in Colombia, and there have been dozens of assassination attempts and death threats issued. In one of the latest attacks against CREDHOS, on 25 July 2016, the paramilitary group Autodefensas Gaitanistas de Colombia (AGC) circulated a pamphlet on social media in which they issued death threats to human rights defenders, union leaders and public officials who support the peace process. In the pamphlet, there were direct threats against CREDHOS president Iván Madero Vergel.

Human rights defenders in Colombia have continued their work, often in areas dominated by illegal armed groups, despite the high levels of violence perpetrated against them, including facing daily death threats. Since the beginning of the peace talks in 2012, HRDs have seen an increase in attacks and threats against them. Front Line Defenders hopes that this decision will be a real step towards justice and collective action for human rights defenders in Colombia. This recognition is a first step, but much more needs to be done in Colombia to guarantee the protections of protection human rights defenders, and that they are able to carry out their legitimate human rights activities without fear of reprisals and free of all restrictions.

On the evening of the 25 July 2016, the paramilitary group Autodefensas Gaitanistas de Colombia (AGC) circulated a pamphlet on social media in which they stated their opposition to the peace process and issued death threats to human rights defenders, union leaders and public officials who support it. The pamphlet stated that the aforementioned groups were targets of assasination.

The pamphlet was sent directly to the Facebook page of the organisation Corporación Regional para la Defensa de los Derechos Humanos (Regional Corporation for the Defence of Human Rights, CREDHOS) and one of its members, Mr Andrés Ortiz, with a note saying, "We are following you". The pamphlet was also sent directly to human rights defender María Ravelo and to the civil society organisation Marcha Patriótica - Magdalena Medio. The AGC pledged to attack any civil society demonstration in favour of the peace process.

Last week, in the afternoon of 18 July 2016, CREDHOS President Mr Iván Madero Vergel received several anonymous threatening phone calls and a text message threatening that a bomb would be planted in the CREDHOS office if they continued their work. Front Line Defenders has reported on similar death threats to Iván Madero Vergel and his family on 25 and 23 June 2015, as well as 9 January 2014. On 25 and 26 November 2013, several men – who the organisation believed to be paramilitary operatives tasked with monitoring the office – were seen watching the CREDHOS headquarters between 9am and 3pm; an incident that took place only a few days after classified materials were stolen from the CREDHOS Barrancabermeja headquarters.

Front Line Defenders strongly condemns the death threats issued by the paramilitary group Autodefensas Gaitanistas de Colombia against human rights defenders in Magadalena Medio and urges the Colombian authorities to take immediate action to investigate these events and bring the responsible persons to justice. Front Line Defenders also respectfully reminds the Colombian authorities of their duty to provide, in consultation with the human rights defenders, adequate protection measures that will guarantee their physical and psychological integrity along with that of their family members.