About Nguyen Trung Truc
Status:
Sentenced
About the situation

On 12 September 2018, Vietnamese human rights defender Nguyen Trung Truc was sentenced to 12 years in prison by a court in Dong Hoi City in the province of Quang Binh on charges of trying to overthrow the state. 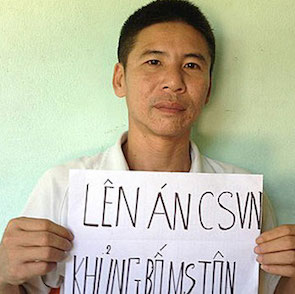 On 12 September 2018, Vietnamese human rights defender Nguyen Trung Truc was sentenced to 12 years in prison by a court in Dong Hoi City in the province of Quang Binh on charges of trying to overthrow the state.

On 12 September 2018, after a half-day trial, Nguyen Trung Truc was convicted under Article 79 of Vietnam’s 1999 penal code with carrying out activities “aimed at overthrowing the people’s administration”. After the trial, his lawyer said that the prosecutors had failed to present any evidence supporting their charges. The human rights defender denied all the accusations made by the state prosecutors against him.

On 4 August 2017, Nguyen Trung Truc was arrested in Quang Binh province. During the arrest, the human rights defender was forced to sign documents and the police confiscated his family member’s phones and papers.

This is the latest conviction in a recent series of lengthy sentences handed out to human rights defenders in Vietnam. On 5 April 2018, eight members of Brotherhood for Democracy were found guilty and sentenced to lengthy prison sentences of 9-15 years each. Members of Brotherhood for Democracy are regularly arrested on vague and broadly defined charges such as Article 79.

Front Line Defenders strongly condemns the unjust conviction and prison sentence handed to Nguyen Trung Tuc, as it believes such are directly connected with his peaceful and legitimate work for human rights in Vietnam.

1. Immediately release Nguyen Trung Truc and quash the sentence against him;

2. Ensure that the treatment of Nguyen Trung Truc while in detention, adheres to the conditions set out in the ‘Body of Principles for the Protection of All Persons under Any Form of Detention or Imprisonment', adopted by UN General Assembly resolution 43/173 of 9 December 1988;

3. Return the phones and papers of Nguyen Trung Truc’s family members confiscated during the arrest, as they are manifestly not linked to any criminal activity;