About Lito Abion
Status:
Killed
About the situation 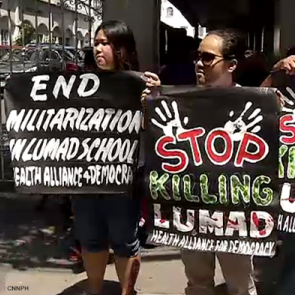 Lito Abion was a human rights defender and a member of Tagdumahan, a grassroots organisation in San Luis, Agusan del Sur, which fights for the rights of Lumad - an indigenous community in Mindanao. Tagdumahan has been resisting the entry of mining in the ancestral lands of the Banwaon and Manobo communities in Agusan del Sur due to environmental and economic concerns about the impact of the mining project on Lumad's livelihood.

At midday on 28 September 2015, human rights defender Mr Lito Abion was shot dead by unidentified men at a bus terminal in Agusan del Sur. Lito Abion, who was working as a driver there, was waiting for passengers and talking to his fellow drivers, when one of two passengers on a red Honda XRM motorcycle, which was parked nearby, pulled out a handgun and shot the human rights defender. He sustained two bullet wounds in his back and another in his neck. The attackers fled on the motorcycle immediately afterwards.

Mr Jun-jun, a driver who had witnessed the killing, said that it was the same motorcycle that was used when Angis Precioso, a founding member of Tagdumahan, was killed in San Luis, Agusan del Sur on 22 December 2014.

Indigenous peoples' rights defenders in the Philippines face repeated targeting, including killings and harassment. Most recently, on 1 September 2015, Mr Emerito Samarca, who was the director of the Alternative Learning Centre for Agricultural and Livelihood Development (ALCADEV) for the Lumad people, was killed, alongside two other members of the Lumad indigenous community.

On 13 September 2012, Mr Genesis Ambason, who was the Secretary-General of Tagdumahan, was killed near to San Luis, Agusan del Sur also.

Front Line Defenders strongly condemns the killing of the human rights defender Lito Abion and believes that he was specifically targeted on account of his peaceful work in defence of indigenous rights.

1. Carry out an immediate, thorough and impartial investigation into the killing of Lito Abion, with a view to publishing the results and bringing those responsible to justice in accordance with international standards;

2. Guarantee in all circumstances that all human rights defenders in Philippines are able to carry out their legitimate human rights activities without fear of reprisals and free of all restrictions.