About Erley Monroy
Status:
Killed
About the situation 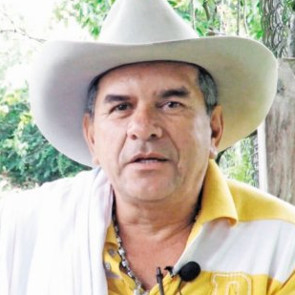 On 19 November 2016, land and environmental rights defender Mr Hugo Cuéllar was shot five times by two unknown assailants, he survived but remains hospitalised in critical condition. The day before, on 18 November 2016, his colleague Mr Erley Monroy died of wounds inflicted by unknown attackers. Two more grassroots leaders were killed and another human rights defender survived an assassination attempt over the same weekend.

Erley Monroy was a land and environmental rights defender and the Director of the Asociación Campesina Losada-Guayabero- ASCAL-G (Farmers' Association Losada-Guayabero), a land and environmental rights organisation animated by local farmers in the municipality of San Vicente del Caguán, department of Caquetá. Hugo Cuéllar is also a member of ASCAL-G, in addition to being a member of the committee presiding over the Fundación por la Defensa de los Derechos Humanos y el DIH del Oriente y Centro de Colombia- DHOC (Foundation for the Defense of Human Rights and International Humanitarian Law in  Eastern and Middle Colombia).

On 19 November 2016, Hugo Cuéllar was shot five times by two unknown assailants in San Vicente del Caguán, Caquetá. The human rights defender survived but remains hospitalized, and in critical condition. Hugo Cuéllar was shot on his way home from the funeral of his colleague Erley Monroy, who was killed the day before. On 18 November 2016, Erley Monroy was gravely wounded and later died after being hospitalised in San Vicente del Caguán. Erley was known to be an opponent of the fracking method for oil extraction in La Macarena and shortly before his death, he had denounced the renewed activity of paramilitary groups in the area. He had also been the target of a smear campaign animated by the mayor of San Vicente del Caguán, Mr Humberto Sánchez, who claimed  the human rights defender was using his organisation to extort people on behalf of the armed group Revolutionary Armed Forces of Colombia (FARC).

During the same weekend, two other local leaders were killed and another survived an assassination attempt.  On 18 November 2016, Mr Didier Losada, President of the El Platanillo Neighbours' Association, was shot and killed in front of his family by a hooded man who entered his home in La Macarena, Meta. On 19 November 2016,  in La Unión, Nariño, Mr Danilo Bolaños Díaz – from the  Asociación de Trabajadores Campesinos de Nariño -ASTRACAN (Association of Farmers Workers in Nariño) was heading back home with his partner, after attending an event organised by the National Association of Farmers' Reserve Zones (Asociación Nacional de Zonas de Reserva Campesina, ANZORC), when two men on a motorcycle shot at them six times. Danilo Bolaños Díaz and his wife were unharmed. Also in Nariño, on 20 November 2016, social leader Mr Rodrigo Cabrera Cabrera was travelling on a mototaxi when two men shot at him – reportedly 12 times - and killed him.

These events are particularly worrying at a time when the definitive signature and implementation of the peace agreement between the national government and the FARC-EP are looming. Local organisations have denounced these physical attacks and killings as a violent onslaught of interested parties to postpone or prevent progress of the peace process. It is important to note that, only a  few months ago, after the peace agreement between the State and the FARC was unveiled on 26 August 2016, thirteen human rights defenders and grassroots social activists in Antioquia, César, Cauca and Nariño were assassinated in less than three weeks. The non-governmental organisation Programa Somos Defensores had already reported 53 human rights defenders and activists killed in Colombia from January to September 2016. After last weekend’s events, the organisation has released the most accurate number to date, which amounts to 68 killings of human rights defenders this year only– already 5 more than the overall number for 2015.