About Jestina Mukoko
Status:
Wins Court Settlement
About the situation

Ms Jestina Mukoko was abducted by Zimbabwean security forces from her home in Norton Harare on the morning of 3 December 2008, at approximately 5:00 am. 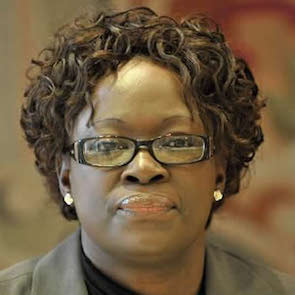 Jestina Mukoko is the Project Director of the Zimbabwe Peace Project (ZPP), an organisation monitoring and documenting violence and human rights abuses across the country through a network of peace observers.

In a case of triumph over impunity, Zimbabwe Peace Project (ZPP) and Zimbabwe Lawyers for Human Rights (ZLHR) welcome the judicious decision handed down by the High Court, which on 27 September 2018 ordered the state to pay $150 000 to Jestina Mungareva Mukoko, a pro-democracy campaigner and the Director of ZPP.

In a Deed of Settlement endorsed by the High Court, the defendants have been ordered to pay $100 000 to Jestina in respect of her claims while a further $50 000 will be paid as a contribution towards her legal costs.

Jestina was abducted by some unidentified armed men from her home in Norton on 3 December 2008, and her whereabouts together with two ZPP employees Broderick Takawira and Pascal Gonzo, who were also abducted later in December 2008 remained unknown until December 24, 2008, when they first appeared before the Harare Magistrates Court, after weeks of being held incommunicado and being tortured.

In court, Jestina and her colleagues and dozens of other pro-democracy campaigners were accused by government of plotting to topple Robert Mugabe’s administration through recruiting people to undergo military training in neighbouring Botswana.

After her release from a torturous three months stay in prison, Mukoko with the assistance of her lawyer Beatrice Mtetwa, a member of ZLHR, took legal action against the state.

In September 2009, the Supreme Court granted a permanent stay of prosecution in favour of Jestina due to the violation of several of her fundamental rights by state security agents as she had been subjected to torture and inhuman and degrading treatment including simulated drowning, being locked in a freezer and being subjected to physical assaults as her tormentors tried to make her confess to plotting to overthrow the administration of Zimbabwe’s former leader Robert Mugabe.

In 2017, the High Court ruled that those who had illegally arrested her could be held liable in their own individual capacities and the case culminated in lengthy protracted negotiations that have led to this outcome. During this time, Jestina was called different names such as ‘regime change agent, reactionary and other unprintable words in a bid to delegitimise her legitimate human rights activism. She was portrayed as a criminal, a tag which remains today but this settlement in the court vindicates her and her work in defending human rights.

Significance of my case

This outcome will not make up for the scars inflicted on her but it will contribute to the healing process while emboldening all those who may still be pursuing justice against the excesses of the state, including those who suffered a similar fate like mine, who are yet to get justice. I am aware, others that were abducted and disappeared as me, have had their cases stagnant with not much progress as the files are said to have been sitting in ‘one office’ for many many years. I take that again, many, many years!

The patrimonial settlement cannot atone for the trauma and suffering that I suffered and went through at the hands of the state security agents who were ruthless, merciless and very evil. It will not make for lost time as my liberty and all other human rights accorded to me by virtue of my being human was unjustifiably curtailed nor will it provide solace for my traumatised family – my mother, son, brothers, sisters in law, extended family, friends and other peace loving citizens.

However, it is a victory for the rule of law, constitutionalism and a mortal blow to impunity. The High Court’s decision is proof that the justice system is still able to prove the involvement of the state and its representatives in gross human rights violations, and bring them to account, with justice being done for the victims like myself.

It sets a landmark precedent and shows that the state actors can be held accountable for their illegal conduct. It also sends a message to the overzealous enforcers of orders and in this case very illegal orders to violate a plethora of my rights that they will be held responsible for their actions and this can even be in their personal capacity.

I hope my story will inspire many other victims. To some extent, justice has now been done and this case will stand as an example in the continuing fight against impunity for state crimes and excesses.

My resort to litigation and the subsequent victory in court sends a strong signal that state sponsored crimes cannot go unpunished. It is also an encouragement to human rights defenders that the dangers of their work will not be in vain. I hope this case will embolden younger activists to pursue social justice in the comfort that they can rely on this case to hold the state or anyone accountable who may threaten their liberties.

It is also a vindication of the advocacy work done by all human rights activists and those who have invested in promoting and protecting human rights that even though the fruits of this cumbersome and often ardous journey may come late , they eventually come. This is a victory for everyone who has been in the trenches with me and who has walked this risky journey of human rights work.

I hope that this victory will set an example, particularly to the Zimbabwean authorities, who must now prosecute the perpetrators of abductions and enforced disappearances which is a heinous crime. The High Court’s decision sends a clear signal to the Zimbabwean authorities, who must do everything in their power to guarantee victims access to impartial justice and to put an end to the endemic impunity that is enjoyed by torturers and the perpetrators of serious human rights violations.

This settlement comes at a time when the Commission of Inquiry into Post Election Violence set by President Emmerson Mnangagwa has started its work to establish the facts around the circumstances that led to the death of six people on 1 August 2018 in Harare after members of the Zimbabwe Defence Forces opened fire against protesters. It must be established whether the force used by members of the Zimbabwe Defence Forces was proportionate to the threat posed by unarmed protesters. It must also be established whether in doing so they overstepped their mandate and therefore should be held liable or the state vicariously liable. This case must form the basis for national rejection of all forms of impunity and the same principles must be followed by the Commission of Inquiry into Post Election Violence.

In conclusion, I, Jestina through the Zimbabwe Peace Project, which plays a critical role in documenting human rights abuses, will continue to join hands with other civil society organisations such as ZLHR to champion human rights in the post- Robert Mugabe era without fear or favour. The journey to full implementation of the Constitution and compliance with the supreme law of the land continues.

Front Line is deeply concerned following reports received of the abduction of Ms Jestina Mukoko by Zimbabwean security forces from her home in Norton Harare in the morning of 3 December 2008, at approximately 5:00 am. Jestina Mukoko is the Project Director of the Zimbabwe Peace Project (ZPP), an organisation monitoring and documenting violence and human rights abuses across the country through a network of peace observers.

On 3 December 2008, at around 5:00 am, approximately fifteen armed men in plain clothes, driving a Mazda Familia with no registration plates, surrounded the home of Jestina Mukoko. Four of them broke in threatening the guard with guns and abducted Jestina Mukoko, while still in her nightdress. The abductors are suspected Central Intelligence Officers (CIO) and police agents. Jestina Mukoko´s son, who witnessed the abduction, reported the kidnapping to human rights organisations who are searching for her in police stations around Harare. As yet, her whereabouts remain unknown.

Front Line believes that the alleged abduction of Jestina Mukoko may be a result of her legitimate work in defence of human rights, in particular her work in documenting violence and torture in Zimbabwe. Front Line is concerned about the recent increase in the harassment of human rights defenders in Zimbabwe and is gravely concerned for the physical and psychological integrity of Jestina Mukoko.